Mother Tongue Spoke to Us All Tonight at CityStage

Tonight’s performance of “Mother Tongue” at City Stage by the First Generation Ensemble of the Performance Project was an original, creative and powerful performance put on by this group of seven young men and women who shared their stories, difficulties, and lives as immigrants to the U.S.

In stories, songs, and dances they calmly described horrific conditions that few non-immigrants can even imagine. The stories were told both in English and like the title forecasts, in mother tongues: Arabic,   Swahili, and Nepali, and the stories came from Congo/Tanzania, Bhutan/Nepal, South Sudan, Holyoke, and Springfield.

One of my favorite aspects of theater is going into a play with no idea of what is coming at you…I love letting the stage and the actors unfold like peeling back the layers of an onion to see what’s inside.  I knew that the play would showcase four languages and that a youth ensemble from Springfield was putting it on. That’s it.

It turned out to be joyous, tearful, and powerful because it was these seven teenagers’ real family life stories we were hearing, both in Swahili and in all these mother tongues.

The audience revealed in a talk-back after the show’s premiere production that they were very moved by the show. One woman said she cried at many times during the sad monologues and others agreed with this, and thanked the young actors for their fine work.

These seven high schoolers all came to Springfield from other faraway lands, including Tanzania, Bhutan, South Sudan, and Puerto Rico.

To a person each kid had a hard backstory, leaving their homelands for reasons out of their control, and when each of them finally got to the United States, they were in for a tough time when no one around them spoke their dialect or understood their culture.

Painful scenes were recreated by the diminutive girl from Tanzania, Natangelwa Julita Hasani, who hopes so hard that the teacher won’t call on her since the knew just three words of English. Or the kids on the playground mockingly asking her if she speaks “African‘ and do the people in Africa have pet monkeys, or dozens of other cruel, and stupid questions displaying ignorance about her mother continent and their own obvious racism.

Over the course of the play, we get a chance to hear about the dreadful surroundings that drove these children and their parents to a better life. Existential questions flew left and right, and interesting dance routines were developed using the hand-made Tanzanian drums as props.

In one memorable scene, that began with a high school announcement of the mandatory weapons search on the way in, we hear the teacher say blasphemous statements to the bored students. “Did she really say that?” came the retort as the teacher revealed her matching boredom with the class and her job, “if you don’t pass I’ll still get paid,” she smirks.

We can’t even fathom such depravity as seen during the wars in central Africa, the starvation in Darfur, (where one of the actors was born), 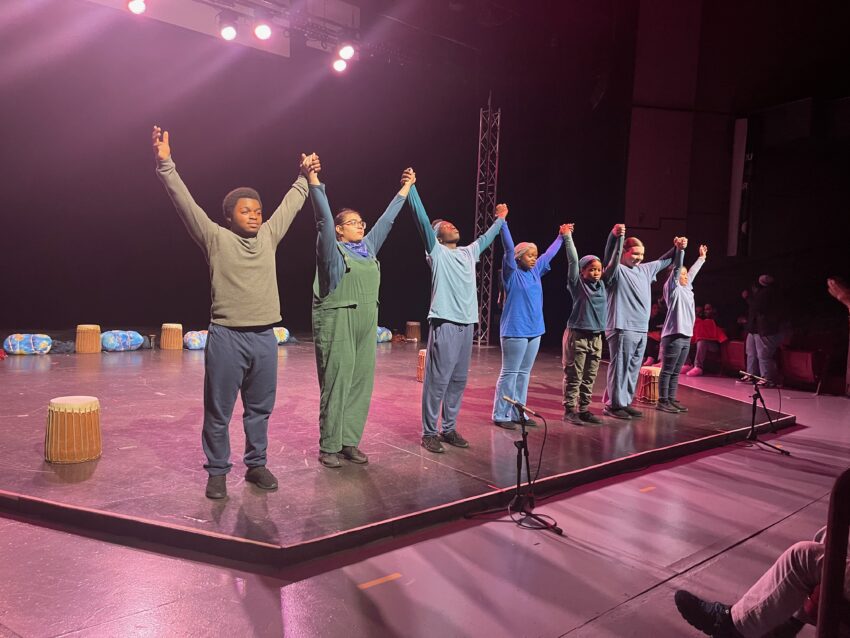 From the government’s genocide attempts in Bhutan to the war disaster of Darfur and the starvation in Sudan, we hear the facts, stories of families that worked so hard to escape–and the sad idea of a grandmother being left by herself in Tanzania while the younger people board buses while crying, the image of grandma not wanting to detach herself from the door of the bus was heartbreaking.

I sat in the audience thinking of how I have never endured these indignities, my schooling was all in familiar English, and nobody mocked my culture or questioned my sexuality or motives. I didn’t have to flee, I’ve never fled, and my life of privilege has spared me from the pain these young people have faced. For that, I am grateful and interested in acknowledging their struggles and complimenting them on how articulately they share them in this play.