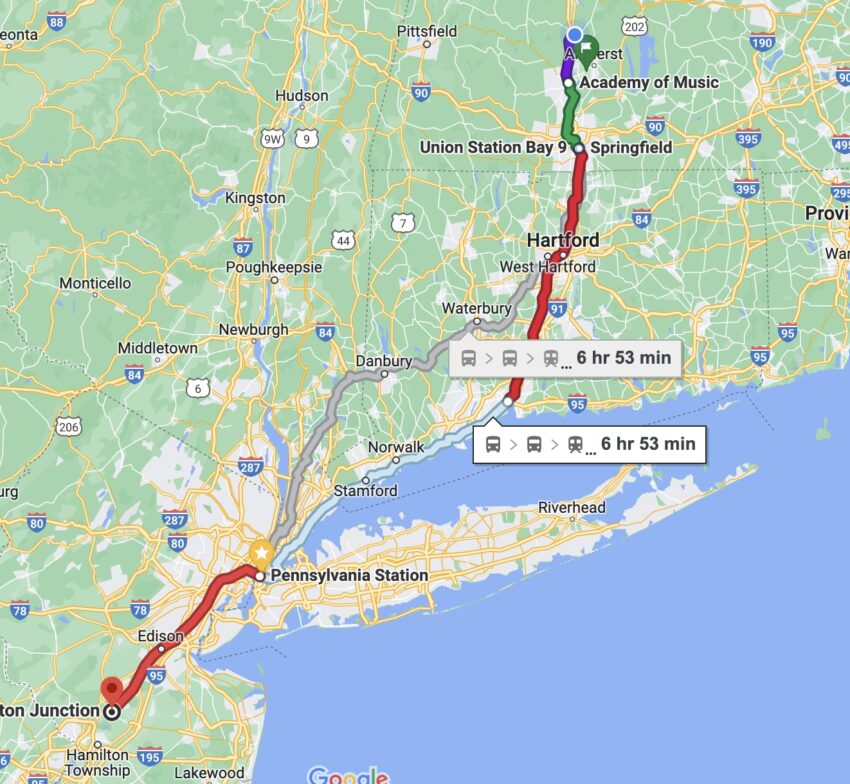 I wanted to Avoid the Drive from Deerfield to Princeton, Here is What I did

This holiday week, I did an experiment, to see how I can take a trip to a place I visit often, my hometown of Blawenburg, outside of Princeton New Jersey without driving.

In 2019, commuter rail called the Valley Flyer began to run between Greenfield and New Haven CT,  but the Greenfield station is 9 miles north.  My hometown is 224 miles from my house in South Deerfield.

So my route began on Sugarloaf Street, about 200 feet from my house, where I would board a PVTA bus bound for the Academy of Music.  There I’ll take another bus down to Springfield Union Station to catch the 10:30 Hartford Line Commuter Rail to New Haven, then another train into NYC, then another out to Trenton, and eventually, Princeton Junction New Jersey.

The drive takes 4.5 hours but you never know when you’ll hit a traffic jam. So I’m taking this longer alternative route of about 7.5 hours that will keep my car at home and provide me with lots of time to look out the windows of the trains.

My day began by watching the bus I was supposed to take drive right by me…because I was waiting at the only marked bus stop that’s on the other side of Sugarloaf Street.

I saw the bus and then ran home to get my car to try and follow it. I was not successful and realized that I would have to drive to the Springfield MA leg of my journey in order to have a place to park my car for four days.

Springfield Union Station is a nicely renovated large train and bus depot, and it was easy to buy a ticket for the Hartford Line, the runs four times a day to New Haven.  The ticket was $6.25 with my senior discount.

In New Haven, if I followed Google maps directions, I would have taken the Amtrak Northeast Regional #85, and I stopped by the Amtrak ticket window to inquire about getting the one-way ticket.

The Amtrak man waved me away, saying “it costs $149 for that one-way fare!  Just take Metro North and walk to Penn.” This was Amtrak’s own employee advising me to skip their expensive carriage for the cheaper one, and of course, I did that, buying a ticket at a machine for $6.25, with my senior discount off-peak.

So far I was doing great as the old-fashioned train, refurbished a few years ago, whisked me south, picking up a dramatic head of speed during some stretches outside of New Haven. You can tell an old train when there are no plugs and the seats switch from facing one another to upright. Old School all the way.

The only rub was that this train was bound for Grand Central and not Penn. And there are no trains from GC that go to New Jersey, it’s all out of the larger and recently expanded Penn Station.

A Subway is being built that will connect the two stations called the Eastside Access Tunnel.  This is a monumental project that has been delayed but hoping to see the passengers in 2023.

Walking on Sunshine in the City

But it was an easy walk in the sunshine, about 24 minutes past the myriad number of booths offering COVID testing, and the recent phenomenon of legal marijuana in the city that has makeshift pot stores opening up without licenses.

This has made the whole city smell like burning weed, like on the Las Vegas Strip, you smell weed everywhere you walk these days in the city.

I made it to Penn as I heard an announcement that my train was about to depart. The express train to Trenton makes only a few stops, but one of them is Princeton Junction, my destination, on NJ Transit.

So, there was no time to buy a ticket and I ran down to track number one and found a seat.  The train was getting very full, and soon there would be people standing all around me.

I noticed a woman with her backpack taking up a seat as another woman sat precariously on an armrest. “Why don’t you move your bag off the seat so she can sit down?” I asked, and the perched woman gratefully sat down.

Behind me a young woman had a dog taking up another seat. She let another woman sit there and the dog just made himself comfy stretching out on the stranger’s lap. Oh well.

The ride was quick, around 1 hour 16 minutes and the pick-up was a breeze. A few days later it was time to return home and I parked my car in the Taylor Street parking in Springfield. Which was a bad idea.

The Amtrak station at Union Station offers parking for 3-7 days for $50. My errant parking job at Taylor Street cost $75 plus a $50 fine!

On my way home, we had another strange bus moment when the 8 am Coach USA bus never arrived on Nassau Street so my sister drove me to Princeton Junction to catch the train to Penn Station. A breeze. And cheap!

Only $7.35 for the off-peak Senior fare, as it was a Saturday.  The two-decker train was fast and comfortable. Then I got to Grand Central after another walk across town and the train departed at 10:30 to New Haven…plenty of time to catch the 12:30 Hartford Line up to Springfield.  The Metro-North train between Grand Central and New Haven is one of the loudest trains around, banging and wheezing and bump bumps, the tracks are not the smooth continuously welded ones that grace the northern reaches of track.  Headphones would have made it more pleasant.

As the train progressed, the time it was supposed to reach the station was 12:16 pm. But the time was ticking away and as we pulled into West Haven, I started to worry, as it was already 12:22.  Oh NO!  We got there and a bunch of passengers and I flew up to the other side, to track number 3.  I reached the top of the platform just as the red tail end of the Hartford Line train to Springfield was sailing away….damn!!

So we had to wait another two hours for the 3 pm train that goes all the way to Massachusetts.

Stand on the proper side of the street to get PVTA buses.

Bring movies on your iPad for the trip, and an extra battery because your phone might die. Plugs don’t all work.

Take the commuter trains and soon there will be a new subway line connecting the two NYC train stations.

Download the various apps, each one of these services has apps to buy tickets and take advantage of being a senior with your big discount.

2
Inspired and Hopeful to Leave CPAP Behind Mother Tongue: The Poignant Struggles of Immigrants