I’m writing for the Montague Reporter!

There are some times in my life when I think back to some great advice once given to me as a small boy, vexed by anxiety and depression, when I asked a psychologist family friend for his counsel. 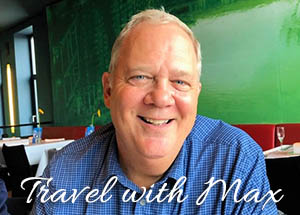 “Well Max, there are times in life when you feel like you’re being swung around by the tail, completely out of control and at the mercy of nature. And there are other times when you will feel like you have the world by the same tail, and you’re the one doing the spinning.  And this will change at different times of your life.”

I have to say that in July 2021, I’m happy to be swinging the tail with the best of them!

Things are going so well it’s scary.   Well not scary, but wow, look at what’s changed and what’s coming up for me.

First of all, like everyone, I used to think about what it would be like when the pandemic was over and how long it would take.  No idea of course, and no idea that it would be a solid year.

But for all intents and purposes, it’s over. We all survived, and in some cases, we are better off for going through it.

I’ve been impressed with the changes, many for the better. Now you can make changes to airline reservations without fees, and people don’t crowd you as much, since we’re all so used to the mask regimen.

But more than that, I think many people have reflected on what their lives were like in 2020 and after the pandemic, made big changes.

I made changes too, and I’m happy with the result. I decided to seek a new place to share my travel writing and they’ve accepted me.

So starting in a few weeks I’ll be writing a travel column for the Montague Reporter, a newspaper that I recently started subscribing to and that contains a startling amount of news in each issue.

I’m starting off with a column about some of the attractions in Western New York State, and I’ll cover mostly regional travel at least once a month.

It’s not on line. It’s a printed newspaper–and I love that part.

I have a long history of working for newspapers, starting with my high school newspaper and the Valley Advocate, and then my own paper, the Portland Chronicle, and then the Portland Press Herald and the Daily Hampshire Gazette.

I’ve also met a new person with whom I am excited to share my life.  But more about that later, we gotta let it all cook until it’s ready.

Book of Eels: How Do They Breed? Molloyster Aquafarm: Slurping Oysters Grown in Maine