Book of Eels: How Do They Breed?

I picked up a new book from World Eye Books in Greenfield a few weeks ago, after lamenting how I did 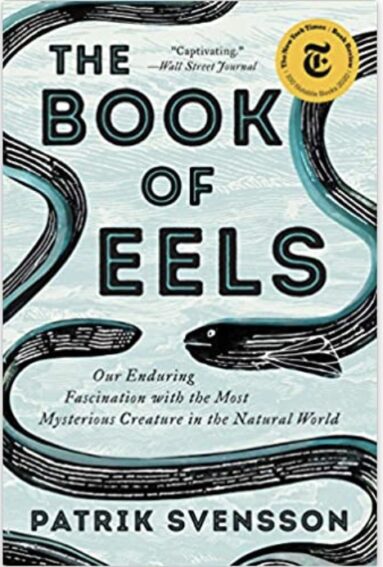 n’t read enough books and was spending way too much time ‘Doomscrolling,” as descibed in this dreary article in Wired magazine. So don’t want that.

So I picked out The Book of Eels by Patrik Svensson.  I never knew I didn’t know that much about my favorite sushi ingredient. Here is just a bit of what I learned lying in bed last night, at a decently early hour, enjoying not looking at my phone.

Eels can live for up to 100 years in captivity. They go through five distinct phases in their life.  They start out as milimeter long clear little maggot like things in the depths of the grass-covered Sargasso Sea, an indistinct but definable region of the Atlantic bordered on all sides by mighty ocean currents.

The grass in this part of the ocean cultivates the perfect breeding ground for eels.  The little leaves then float around and grow into bigger forms, as big as fingers and then they start their journey to fresh water where they will live a up to a staggering 50 years in their new colors, brown yellow and grey.

After a certain time that no human has ever been able to witness or document, they decide to breed and then they find their way all the way back out of the freshwater to the Atlantic and the Sargasso where they will lay those eggs.

There is apparently only one sex of eel. No male or female. It’s funny how people react to eels, especially women, who find them gross, slimy disgusting and repellent. Even as I was sharing the story about this book with a friend, her reaction was one of recoil and horror. Funny.