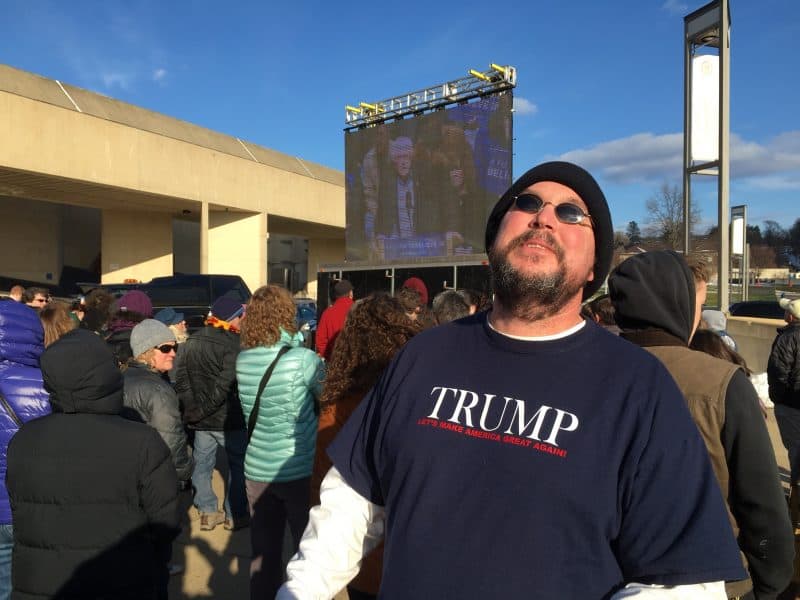 Mike Rooney, the lone heckler at the Bernie Sanders speech at UMass on Saturday.

Bernie Sanders, refreshingly familiar in his dark suit, windswept hair, and Brooklyn monotone, came to Amherst today.  We knew it was going to be a tight squeeze in the UMass Fine Arts Center, but we wanted to be a part of it, so Toni and I popped out on North Pleasant St. to survey the scene of people waiting to get in. It stretched way past the North Pleasant St. bus stop and all the way down the concrete of the FAC!

We were happy to stand right in front of the TV screen with several hundred supporters. Not the ‘thousands more outside,’ referenced by the candidate, but an enthusiastic bunch and not bad considering the students are on vacation. It’s interesting to think of what the turnout would be if The Donald himself had a rally in Amherst. I actually think he’d draw quite a number, so many people want to grab the heckler spotlight!

Candidate Sanders is appealing–a 30 plus year record of voting most of the time the way I would, a shared disgust for our egregious defense spending and for the billionaires who run Washington, and a personal vendetta against income disparity.  But I was beginning to feel like he was Johnny One Note today, at least while he was outside.

This is my rub with Bernie. I don’t care half as much as he does about the Waltons, the other billionaires and whether it’s unfair that they make so much. I want a candidate who cares about terrorists, and even more, the environment. Well here I think we are on good grounds.  I do think that compared with Trump or any GOP candidate, the environment will be in much better shape with a Democrat in the White House.

But Bernie hammered home his main point, that the billionaires are controlling too much, but threw in a few additional points that I agreed with.

He said that pot has had a deleterious effect in the poor parts of the cities, where many African American men have gotten criminal records due to being busted for weed.  So he advocated changing the status from Class 1, the same as heroine, down to a lesser and misdemeanor status.  I can definitely agree with that idea.

He also focused on women’s income parity with men, that he’s make sure both sexes earned the same, and giving moms more paid family leave… along with a $15 minimum wage.  But who pays for this, both Larry Kelley and I asked?    And Bernie also threw in the free college for all promise. Again, who really is going to foot these bills?  I love these ideas but I’d like to see the breakdown.  I bet there aren’t enough fatcats to bankroll the huge cost of free tuition.

I think that the oversimplification of every issue that we see in Donald Trump really scares me. It’s not that simple, we need smart reasonable people in power to solve the huge problems. A guy who has publicly insulted 68 different people we know about, as has been published about the Donald–that just makes me nervous.

I think I would give Bernie the vote here in Massachusetts but I think he won’t make it through the whole country and win the nomination.  Still it would sure be an intriguing match-up to have Trump vs. Bernie–the loudmouth capitalist versus Vermont Socialist!  It’s a hard decision because I really like him, and want him to win, but I remain like so many people, skeptical and wishing I could combine his ethics and sensibilities with Hillary’s experience and broader experience, to make a better candidate.