A Bone Carver Living His Dream in Omapere

On my last morning in Omapere, I visited a man who I had heard about on the motorboat over to the Dunes. His name is Jim Taranaki and he’s happy to be doing what he loves, every day, and sharing his art with visitors who come see him in his workshop.

He’s a bone carver, taking pieces of cow leg bones and turning them into the pendants worn around nearly every Maori’s neck here in the Far North. But his work adorns more than just crusty old men; women love the designs too.  I knocked on Jim’s door and he was happy to let me in past his fierce looking but mute Staffordshire dog, where he opened up his display of beautifully carved bone that looked like ivory.

“You have to boil the bones for a long time, three different times,” he explained, adding that he sometimes makes soup for his happy dog. Then he adds some washing powder and boils it again before it gains its bright white color.  He got into carving about seven years ago, and started with just a nail and a little razor. When somebody introduced him to the Dremel tools, his work took off. 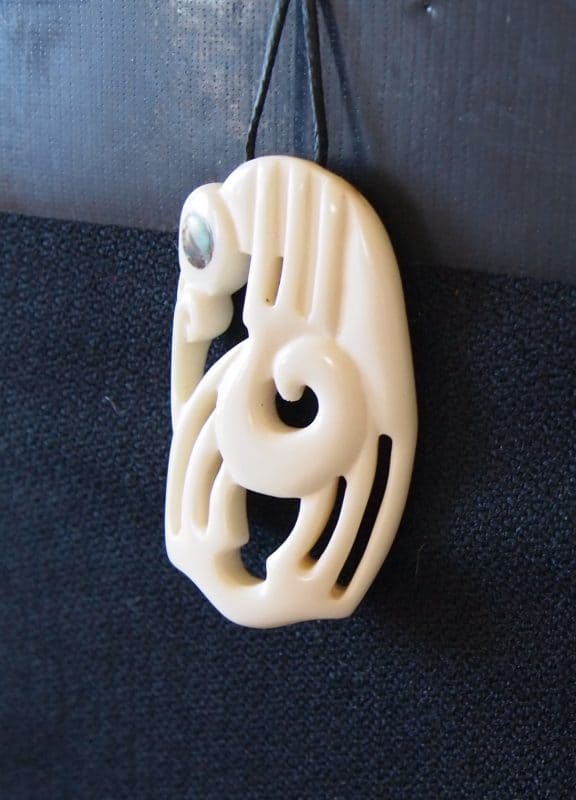 Groups and individuals can come and finish off a pre-cut carving, and then take it inside to polish it to a finish. Though there are companies that send the bone to China to get it mass produced, Jim’s work is thoroughly hand-made, all the way. He sells his carvings in many parts of the North Island as faraway as Auckland.

“As you wear them, they absorb the oil on your body,” he said. “So after a while it takes on your particular color. When a man hands this down to a son, it’s a way of remembering, since that person’s oil will rub off on the new wearer.”

As I watched Jim sawing away around and outline of a butterfly and we looked out the window into the blue ocean just beyond the workshop, he said he really loved doing this and especially when he teaches someone who thought they couldn’t do it. “That’s the best thing,” he said. “Seeing people create something beautiful with their own hands.”