At a Meeting of Railroad Planners, We Dare to Dream Big

Railroad people have their own vernacular, and a unique set of acronyms that are shared between them. One is Federal Railway Administration, FRA, the new federal agency that is taking care of spending the $8 billion in funds that’s been allocated by the government.  The other is ‘service area’ or, who runs the trains, and rights-0f-way, culverts and electricification.

Tonight we met a railroad man named Charlie who helped us understand the dramatic changes underway that have a great likelihood of bringing both high speed intercity and reliable, frequent commuter rail service to the people here in the Pioneer Valley.  Charlie is the GM of the Pioneer Valley Railroad, a short line that has its own tracks between Westfield and Holyoke.  Charlie’s observation: It’s tough dealing with Guilford Transportation, the owners of a lot of track in Connecticut and Mass.

The momentum was already building up in Connecticut over the past few years, when funds and big study were launched focusing on commuter rail service between New Haven CT and Springfield MA.  But when the federal stimulus bill passed, inside its massive gullet was $8 billion for high-speed intercity rail…and suddenly the focus switched so that a new study now tries to combine elements of both to speed it all along.

I attended a meeting tonight with about 65 other planners, rail advocates, and interested citizens who all listened eagerly as the planners for CT and the Pioneer Valley presented their visions, and goals.  FIrst up was frequency…today you can choose among one trip one way, and one trip the 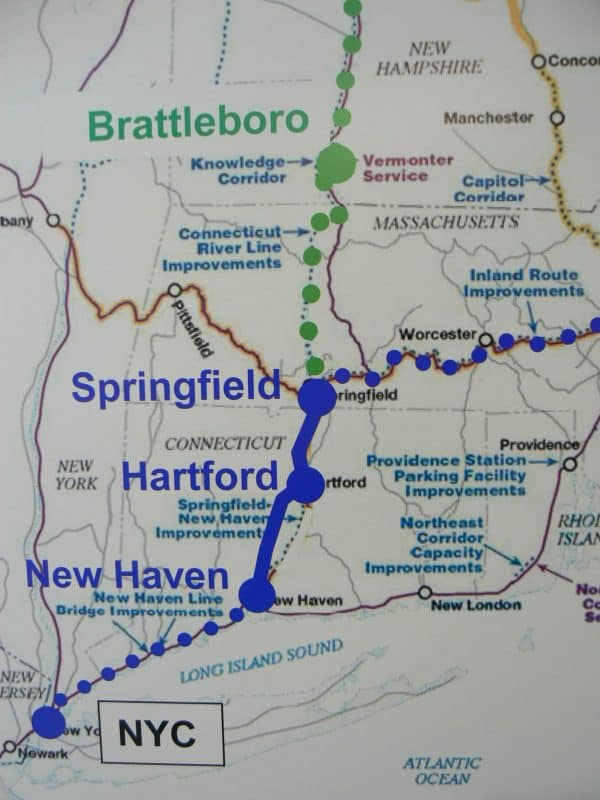 other way. The goal is to offer hourly and even every half-hour. As one man said, trying to to go a meeting in New York and if the next train home isn’t until the next day, well, that makes it pretty tough.

A large African American man piped up from the first row. “I built the tracks from New York to New Haven, and boy, it made such an impact, from higher housing values, to so many great jobs, and boy, when that Acela wizzes by, you can barely hear it.”  He said that people will never regret supporting funding for railroad projects, because so much good comes after those tracks are activated and become a part of the neighborhood’s fabric.  “Don’t let this stop, keep it going, it is going to be sooo great!”

Dad’s Drunk, Mom’s Crazy, and There is Never Any Food We’re Busy. But We Go