The Music Man of the Jersey Shore 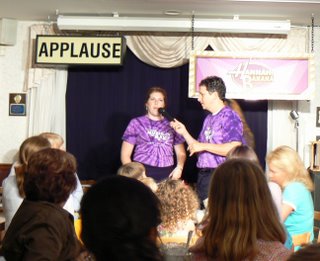 Aggie Roberts is the Music Man of the Jersey Shore. His ice cream shop on Grand Central Avenue in Lavallette packs them in seven days a week. While serving ice cream treats, a troupe of singers dances and clowns with the crowd for an hour of fun.

There’s nothing quite like it, and it keeps Aggie working eighteen hours every day of the short summer season. He’s been at this for seven years. They had 30,000 paying guests the first season, and in 2008 they saw 40,000. The combination of enthusiastic, talented singers and ice cream treats for folks on vacation is a hit!

Each year Roberts has more than 125 eager drama majors from colleges up and down the East coast audition for five coveted spots in his roster. Packed houses enjoy sundaes, ice cream floats and brownies slathered with chocolate sauce along with the rollicking cabaret. It called The Music Man Singing Ice Cream Shoppe, and it’s a hit with young and old, who fill the 95 seats every night until it’s time to “eat up, pay up, and get out!”

Earlier in the afternoon, the troupe puts on 4 pm Fairy Tales and they offer 5 pm shows too.

In Lavallette’s public library, the six computers are in use every hour they’re open, but a little secret is that The Music Man offers free Wi-fi and good coffee, starting at 8 am. Aggie said he’s open partly because somebody has to field the hundreds of phone calls they get from people who want to reserve for the singing shows.

Twilight at the Beach: Why We Came Searching is Better When You Ask Facebook Friends