Giraffes Licking Our Car Gives Us a Thrill 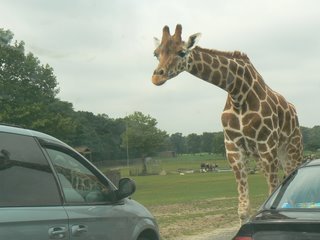 This morning we watched giraffes lick the hood of our minivan as we drove through the Safari Park at Six Flags, about 40 minutes north of our beach pad in Seaside Heights.

The giraffes like the pollen that sticks to car roofs and hoods, and the people inside the cars like watching the giant necked creatures as they block traffic.

Six Flags was once called Great Adventure. The most prominent landmark here is a 450 foot tall tower that holds a looping track.As the photo at left shows, it goes straight up and straight down, achieving a staggering 128 mph on the long way down. Sadly, the structure was recently struck by lightning and so on our visit no riders were making the steep climb to the death.

It’s an expensive proposition to make a day of this park, which a man in the parking lot told us is owned by the same guy w 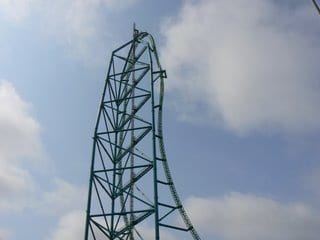 ho owns the Washington Redskins. You can find lots of coupons to save on the $89 combined admission price, or you can buy a pack of six admissions for $49.

But if you were a roller coaster aficinado, this would be a must-see stop. I mean, this many chances to defy gravity and risk death would be hard to resist for those who look for this kind of fun.

A Concert on the Beach on a July Jersey Night Twilight at the Beach: Why We Came