The Ocean Grill is the Place To Be in Vero 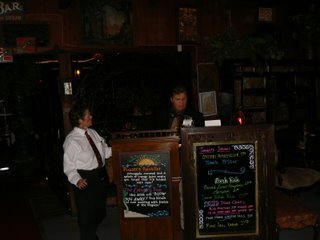 I had an excellent night’s sleep in the comfy big bed here at the Caribbean court. Overhead a fan gently revolved, and an HDTV provided striking images as I fell asleep.

Lori Burns, the Tourism board director, took me to a landmark restaurant known by everyone in Vero, the Ocean Grill. She said she remembers a few years ago, the whole town would show up here to fill sandbags during a No’reaster. The venerable restaurant is set on piers and the uneven floors inside belie the long history of water flooding in rom the nearby ocean.

I met Charlie Repogle, the owner, whose family came here in 1965, after running a successful steak house in Milwaukee. He has a son in culinary school, so there might be another generation that will take over some day.

Charlie owns polo horses and played recently with Tommy Lee Jones. Polo is played on a 300 yard long field, and there is a development under way about 10 miles west that will feature 3000 acres of equestrian living for polo and people who want to live with their horses.

“It’s a recession-proof area,” he said, citing the gated communities of John’s Island and Windsor where high income seniors keep his tables full during most of the year. A 300-yard artificial reef was set out just where the waves break several years ago, building up the beach and bringing sea turtles to the area. Because of this, the restaurant turns off its lights on the ocean during their mating season since it confuses the turtles coming in from the sea.

I got a chance to try their hard to crack stone crabs and a piece of Pompano, locally caught and served with an apricot glaze. The soft lighting, large wooden tables and clubby ambience made for a wonderful meal.

‘Zero Beach’ No More on Florida’s East Coast God I Wish I looked Like This Guy!