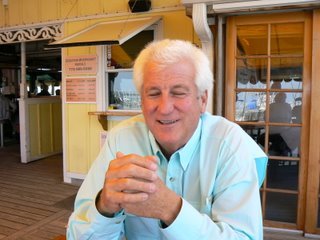 I met a man I wish I looked like. A silver haired, well-toned, tall, hotelier and restaurateur named Tom Collins owns a sprawling hospitality empire in Sebastian Florida, about eight miles up Rte 1. It’s called Captain Hiram’s and it’s right on the river, with a marina, hotel, sand bar, large restaurant and banquet hall. They serve 2000 people a day here, that’s a lot of dishes and food.

He was at the bar when we came in, wearing a pale blue Columbia fishing shirt, and we walked into his Sand Bar to chat. Wind howled out on the Indian River, where the moored boats were bobbing in foamy river water. The view was magnificent, with the famed fishing spot the Sebastian Inlet in view between a man-made desolate island, a remnant from the building of the intercoastal waterway in the ’40s.

Tom came here in ’72, growing up in Maryland, and in 1985 he bought this piece of river front property with a 22-seat restaurant, and began building it up. He speaks in the special twang of the Maryland natives, and owns part of a 61′ yacht that he sails in the Bahamas. Later I talked to his sales manager, Brinda, who said that when the hurricane of 2004 hit, Tom was right in the trenches, removing the muck and helping to get them back in business. The hurricane is a consistent theme here, since just about every building on the island was trashed in some degree or another and the good news is that they all rebuilt according to Dade County code. This is hurricane proof with common sense extra rebar, super strong tiles, and other fortifications against the fury of the wind and water.

Lunch was served and I plunged into Mahi Mahi, a sweet potato and green beans. We watched boaters moor their boats in the bubbly water. Later in the meal a man sitting next to us summoned the waiter. “Hey Big Guy!” he called out. “Come over here. We got a plane to catch.”

I felt bad for the server having to have people call you like that. And he wasn’t even a big guy.

We toured around and took a peek at the ‘captain’s quarters,’ located right near the stage where musical acts rock the house every night. “It’s not good if you’re trying to sleep, Brenda advised, “but some people love staying there. ” The view of the river didn’t hurt, it was a cute little suite connected to the other rooms.

Later that afternoon we went to the Centennial Trail, a wooden walkway that takes you all the way out into a marsh to look at Pelican Island. We saw dolphins cavorting out in the ocean in front of the island. Here the great big manatee can be found, but none were there when we visited.