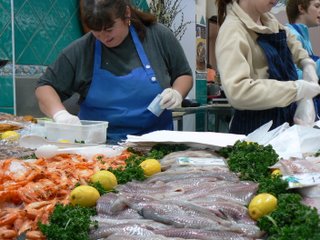 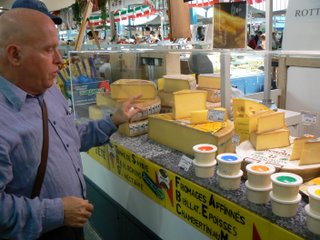 Alex Miles is a man I won’t soon forget. We met this fascinating, articulate and curious fellow in Dijon, he was with the tourism board rep and took us around the city on our tour. With a short stature, a shaved bald head, and a penchant for details, he was a perfect guide to take us around this wonderful compact city that he’s come to love. He doesn’t act like he knows it all…but he sure did educate us about food, wine, France and the way cooks think.

He learned to cook in Parisien restaurants. He never studied French, but now speaks it like a champ. He married his French wife and they moved to Dijon several years ago, he took a gig running a chain of croissant shops. But that didn’t work out, and he got into teaching, lecturing and consulting on his favorite subject–the sociology of food.

In the sprawling and spotless Dijon market, Alex was in his element. We met his favorite baker, who presented us with the perfect crusty baguette. We met his fishmonger, and the startling gleam on every fish and the absolute clarity of their eyes convinced me these were the freshest I’d ever seen. Throughout the market, we met his friends, he comes here every day to stock up and they know him well. “It’s a human-sized city,” he told us, biting into a piece of crusty walnut bread. “There is something hidden behind each wall.” This we found out when a non descript door lead us to a back alley that opened up into a gloriously ornate wood and limestone carved inner sanctum, that was once a chapel.

Alex is a non-practicing Jew, who said the notion that France is full of anti-semites doesn’t ring true to him. He said he just does not see it, and that people here are no different than in the US in this regard. The press tells a distorted story, he said.

He said that in France, the cooking comes from the top down, and in Italy, it’s from the peasants on up. “Nearly all the best American chefs use French techniques,” he said. “In the US, we talk about health all the time but are unhealthy. Instead of how we eat, it’s what we eat…but it should be the other way around. Dijon, he said, is a good place to think about food.

I left him with a compliment: “You are smart, yet still very curious…and you are as interested as you are interesting.” He said thanks, and we shuffled into our van for our drive to Strasbourg.

Inside the Cave: Tasting Pinot Noirs in Burgundy They Took the Windows Out Just in Time