Shoul Returns from Spain with Tales to Tell 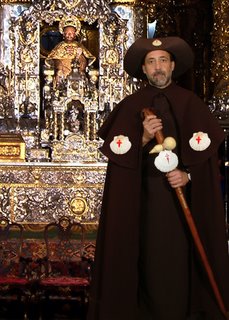 Paul Shoul always has a story to tell. Not just your average story, run of the mill, no he seems to always come up with doozies. Last night I met him at the Brewery in Northampton, and over beers he regaled me with his latest tale. He was flying back from his trip to Spain and Portugal, writing and shooting for GoNOMAD, and he barely made it on to the plane in Spain. Winded, he took his seat, and there was only one empty seat left, right next to him.

As he got settled in, he saw a priest coming down the aisle, also winded, rushing. He was coming right for that seat next to Paul. Paul is never one to keep quiet during a transatlantic flight, so of course he got to talking to the father, who had shed his collar and was trying to cool down. He said he had been traveling for 37 years, two weeks in each place, he is a traveling missionary, and he turned out to be the ultimate nomad.

Paul’s flight that began the trip put him next to a man who had walked hundreds of miles, up and down Europe and South America, and ironically, one of the stops on Paul’s press trip was Santiago de Compostella, the famous pilgrimage town. We’ll no doubt contact him about writing for us, in the meantime, we can’t wait to read Paul’s story coming out soon on GoNOMAD.com