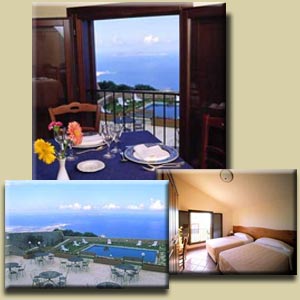 I spend a lot of time reading travel magazines and found a story in Budget Travel about 25 unknown places in Europe. Andrew Appleyard, international sales manager of Exodus, a U.K.-based tour company writes about Erice in Sicily.

“Waves of conquerors–from Phoenicians to Normans, and everyone in between–have left their marks on Erice, a fortified hilltop town overlooking Sicily’s Trapani valley. “In some places, you can see the corner of a Roman wall, and then the modern city on top of it,” says Appleyard, “People are reusing Greek pillars as part of their own houses,” he says.

On Sicily’s northwest tip, just over an hour from Palermo, Erice has spectacular views of the coastline, the Egadi Islands, and, on a clear day, Tunisia. Donkeys wander on medieval streets that wind down to the 14th-century Chiesa Matrice and the Balio Gardens. Vineyards dot the landscape. “You can cycle right up and do tastings,” says Appleyard (he was in Erice scouting locations for biking trips).

Enormous mounds of salt, covered by terra-cotta tiles, and Dutch-style windmills, once used to grind salt and pump water out of the salt pans, line the main road about 30 minutes southwest of town. The salt finds its way into local favorites like couscous with fish sauce, available at the cozy Hotel Moderno, which has 40 rooms, a rooftop terrace, and 19th-century touches. Appleyard raves about the food in Erice as “some of the best I’ve eaten anywhere in the Mediterranean.” Hotel Moderno: 011-39/092-386-9300, hotelmodernoerice.it, from $121.