Witch: A Slice of Medieval with a Modern Twist

Witch Pulls Out a Strong Performance with Three Talented Understudies

On a cold and blustery Thursday evening, I left my warm house for a rousing and fun night of live theater. It’s always worth it, as I often say, to fight the urge to cocoon and set out to see actors on a stage, translating the words of a playwright into something memorable and moving. There is just nothing like live theater, and I think too many people my age opt for early bedtimes and miss out on the fun.

On with my review, the play is Witch, by Jen Silverman, and the production was at UMass’ Rand Theater. I was surprised to see in the program that three of the six actors for tonight’s performance would be understudies. But with their rousing and well-memorized performances, nobody missed a beat.

We are greeted by a circular stage, with a nearly full house of mostly students.  Elizabeth (Victoria Lee) strides down a retractable drawbridge and shares her difficulties of being a witch…the townsfolk distrust her and accuse her of casting spells. She’s an outcast, and soon, the devil makes an appearance and begins to offer her a deal to sell her soul.

The sexes in the play are all mixed up, soon we meet Cuddy, the King’s son played by a female actor, (Nat Irmer) but the character is played as a man who leans to the gay side. The ambiguity of gender adds to the appeal.

He’s a dedicated Morris dancer, complete with the moves and the bells.  Throughout the play, we hear the dialogue sprinkled with modern-day inflection, like, you know, castles and horses and medieval lives–they talk as if they’re in 2022.

We meet the devil, known as Scratch, again a female actor (Kaliska Wiley) but originally cast as a man. Whatever. Each of these characters holds our attention, and each had all of their lines down perfectly, and the costumes were spot on.  There is a man whom Cuddy speaks of with disdain, one Frank Thorny, who apparently has become the apple of the King’s eye, and might even become the heir apparent, despite Cuddy being the actual son in waiting.

In a humorous nod to our previous President, a banquet is set including a stack of wrapped fast-food burgers, just like he often served to championship football teams at the White House.  The play’s plot involves succession, and what people are willing to sacrifice (love, and their souls) to get ahead.  The King, Sir Arthur, (Hia Ghosh) wants to find a son to leave the castle to, and late in the play, he realizes as we all do that Cuddy just isn’t going to cut it. Even Cuddy himself knows that, as he feigns interest in the maid, who has her own set of complications involving the vaunted Frank Thorny.

The play’s poignancy comes when it becomes clear that after suffering through starvation as a common peasant, and he’s offered a chance to rise in rank and take over as the heir apparent, Frank chooses filthy lucre instead of true love. He pays the price when the two actors do a rousing stage fight and he meets his fate. 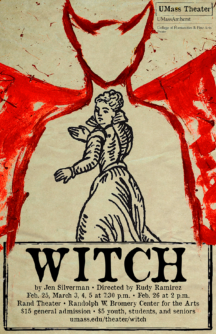 The play was written in 2018 and in the program notes, it asks us “if we have hope that things can get better.  Through its intertwining plots, Witch asks us all to consider what would you be willing to give up to make that hope reality?”

Souls are sold and bargains are made with Scratch, the devil.  It’s a series of transactions that leave nobody happy.

The play answers these questions again and again, and a funny juxtaposition comes at the end when the devil, Scratch, finds herself falling in love with a mere mortal.  She just wants to take time out from being the devil. “Can’t I eat croissants and go whale watching,” she pleads with the invisible power, “I just want a break.”