Denver is an inspiring city, the biggest metropolis for 500 miles around the vast American West.  I just spent five days exploring and enjoying Denver and the surrounding countryside, and I came away once again, impressed with how vibrant the place is. Last Sunday I joined a group of travel writers from around the world for a press trip excursion to see three great Western sites outside of Denver.

We began with the impressive Colorado Railroad Museum, where more than 100 working and non-working rail cars, locomotives, and cabooses can be seen. It’s quite a place, we took a little two-car train for a circular loop around the outdoor museum, which includes an old-fashioned turntable, where giant locomotives can be moved to different tracks that all connect to a central hub. website 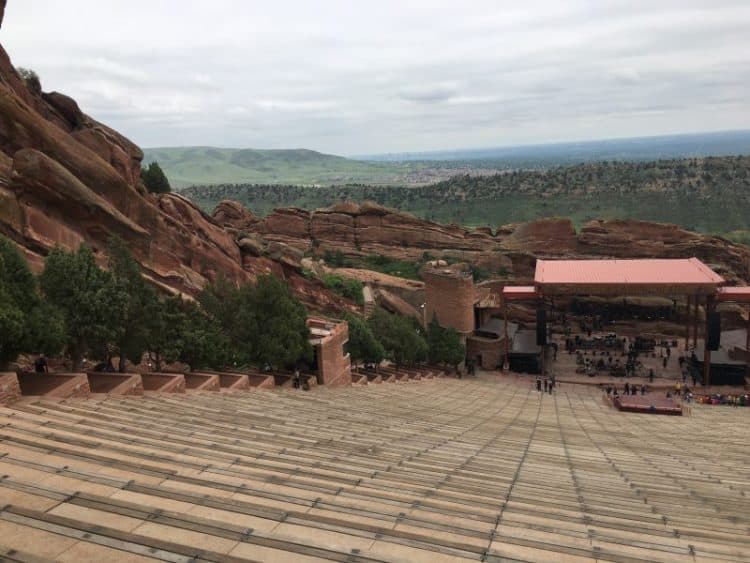 I love railroad museums and this one is superb–plus all of the trains were once used to travel through Colorado or other western states.  Then our group of mostly overseas travel writers jumped back on the bus and headed for Red Rocks, the fabulous music venue in Morrison Colorado.

The list of bands who have played here is everyone–it’s the place that any musician wants to play with the perfect acoustics from the sound bouncing off the rocks.  The line up each year includes just about everyone who is hot in music.  Many locals enjoy running up and down these steep stairs, but we were lucky to have the place to ourselves during IPW, with 6000 of us travel folks enjoying a show by One Republic.

After Red Rocks we moved on to the top of Lookout Mountain in Golden, Colorado, where the legendary Buffalo Bill is buried. We learned all about how fantastically popular this cow roper was, he was in the early 10s probably the world’s most famous man.

He also didn’t kill that many buffalo, he moved on to being a scout and then a great showman.

The museum really gives a good account of his fascinating life, including a book that shows where his Wild West Show was held…that includes 40 towns in Massachusetts, including nearby Greenfield!  website