I spent today wandering around two seaside towns on the southern coast of England.  I took my time, absorbed the local history, and met local shop keeps and others who shared a bit about Seaton and Sidmouth.

My original plan to walk ten miles on the Southwest Coast Path was valiant but impractical. I wanted to see more, and after my recent bout with illness wasn’t up to the slog.

So I set off early toward the far end of Sidmouth’s Esplanade and found Jacob’s Ladder, which leads up to a hill atop a chalky cliff.

Many people were walking with all manner of dogs, properly leashed of course, but amazing in the diversity of breeds. Sophie, for example, is the standard poodle I met just before another Jack Russell ran by pulling its owner by the leash.

I meandered around, in that way you can when you’ve got nowhere you have to be–and discovered the Connaught Gardens, and saw this somewhat creepy placard. 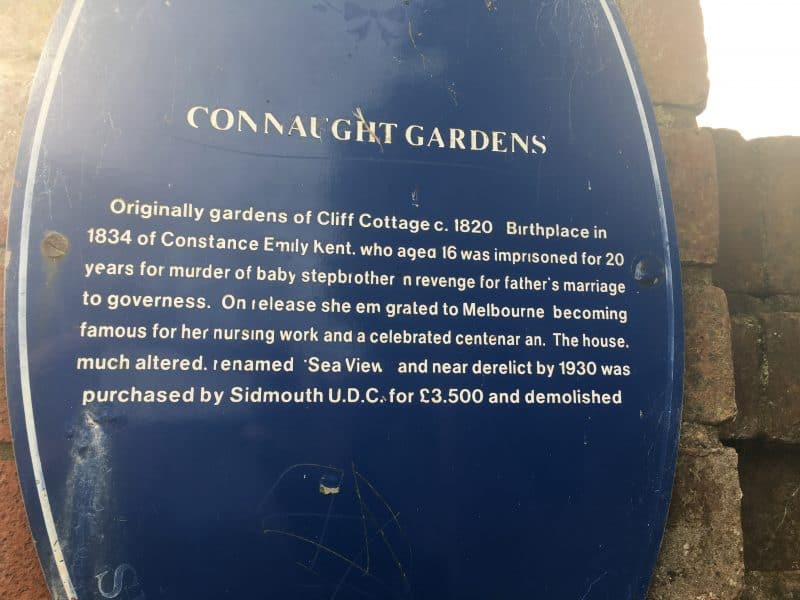 It sounds like she redeemed herself when she moved to Australia…but what a story! That’s what dad gets for remarrying!

Off to Seaton on the Bus

I made my way downtown and caught the local bus to Seaton, about ten miles away.  The doubledecker only cost $4 for an all-day pass, and I made my way upstairs to get the unimpeded view of this Devon countryside, which is described as an ‘area of outstanding natural beauty’ by the government. It is.

The Seaton bus stop is right in front of the waterfront, two elegant steel structures declare, “Waves Share the Shore, and “The Shore Shares the Waves.”  I was ready for a town-wide putter, and ended up meeting R. Norman, who runs the local butcher shop with the slogan “Eat less meat but better quality!”

He told me he was deported from Massachusetts 40 years ago for overstaying his visa. He’s done well for himself ever since here in Seaton. The lamb looks good, and I love his philosophy.

I kept up my walking and talking, discussing Marmite with a local grocer, who said both she and her husband always have it for breakfast and it’s still very popular.  I read the local headlines, which are all

about Priti the foreign minister here who went rogue and had illicit meetings in Israel before getting sacked yesterday.

I popped into the local library to charge my phone and indulged in some quality time–reading a new biography of Willie Nelson for about an hour. That was exquisite and rare.

What a great day to spend doing little, yet doing so much. This part of England may be mostly popular with the Greatest Generation, but there is a lot here to love!  Find out more at Visit South Devon.