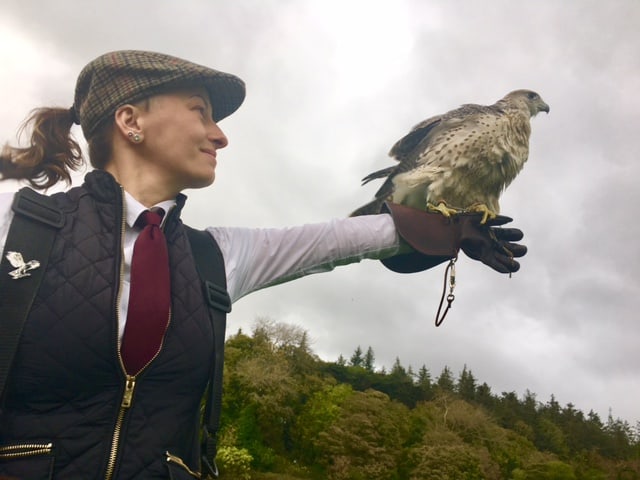 Today we got a good look at the Irish coast and did all kinds of different things. We left Killarney at 10 for a long drive over many highways and winding roads bordered by hedges up the Wild Atlantic Way, stopping at Ennis and then to the waterside town of Westport.

At the Idle Wall, we had a top-notch elegant lunch, while the proprietress told us about the seasonal and local sourcing that they are fanatic about.  A parsnip soup with a sizzled sage leaf inside was creamy and delicious, and the other entrees were also artful and full of great tastes. Even the salt was special, their own pork salt served with the sea salt and butter from a farm 5 miles away.

Then we departed for the magnificent Westport House, a 15th-century manor house with a history that involves a woman who lived as a pirate and faked her sex, and a long dynasty of continuous ownership until this year when the big estate went up for sale.

Fingers crossed, three local partners who own the hotel in town are buying the place and preserving and restoring gardens along with creating another hotel property nearby.  Then it was time to meet some birds of prey, and two elegantly-dressed bird handlers began bringing their avian friends out of their van. Two owls, then a hawk.  The hawk took long swoops around the property before he circled up and around and attacked a piece of chicken dangling with its own parachute from a drone.  Then we had a small archery competition, and none of us were very good at shooting.

Then we had a small archery competition, and none of us were very good at shooting, but it was fun to try and learn, and as the rain began to fall, we drove to get bicycles.   Rain is no impediment to riding bicycles, and we donned our reflective vests and headed out on a bike trail. One side is painted green and the other red, to show where bikes and walkers should separate.

The bikes were hired on the late side, but our hosts had a scheme in mind. We had at three-stage dinner, starting at the Westport Coast Hotel, then to the Hotel Westport, and the Clew Bay Hotel, and finally with a pint at Cobbler’s at the Wyatt Hotel.

The rain and the dark had no effect–in fact, the street lights in town for some reason were all dark, making it even darker. But we laughed our way, all the way, to enjoy great local food, fine company and the unequaled hospitality of the Irish at every turn.