Chinese City Tries to Clean Up its Butts 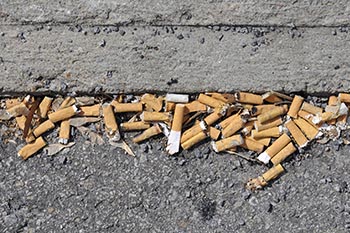 In China, there are more than 300 million smokers. Even with smoking in the US and most other countries down dramatically, China remains a bastion of ashtray users. Or not.

These Sino-smokers consume a staggering 2.5 trillion cigarettes every year. That’s with a “T” not a “B!” An article in last week’s WSJ described what one city is trying to do with all those butts.

In Shengzhou, China which is south of Beijing, local officials wanted to clean up the cigarette butt mess littering their sidewalks, streets and terraces. So they decided to offer a reward a package of tissues, that would be given  out to anyone who brought in at least 1000 butts during the campaign.

The tissues were especially attractive– they offered the, or Persian cat brand, especially soft, and the city spent $30,000 on the rewards they gave each butt hunter. 50 butts for a pack of tissues was the promised exchange.

They found booty butts in their houses and got them from other cities –but the point is, all that Shengzhou wanted was butts from their city cleaning up litter off the streets.

The “Cigarette Butts for Tissues,” campaign appeared to accomplish at least a good portion of the cleanup goal.  Authorities handed out nearly 100,000 tissue packs in exchange for nearly 5 million butts.

At WTM, the New and the Beleaguered Fight to be Seen Rye, in Sussex, is a Great Little Town for a Stroll