The Water Project: Anguish Over the Forgotten Towns of the Quabbin

Emma Ayres crafted an impressive staging of her play, The Water Project, that was the highlight of Eggtooth Productions‘ Full Disclosure Festival over the weekend.  The show was performed on the fourth floor of the Arts Block, to a packed house.

Quabbin Reservoir, the folk opera approached its sad topic from a variety of perspectives.  We meet the family, with mom in perpetual livid rage, and dad just trying to accept but resenting the city folks stealing their water.

Daughter Edith is tormented by the terrible memory of being put on Boston’s T as a kid and having her grandmother disappear, as the frequently recited phrase, “what you don’t see won’t hurt you,” that is heard throughout the play.  An interesting twist is that we meet the grandma as she is living in a Boston-area assisted living apartment, and her caretaker, who she sometimes forgets she knows, implores her to remember her family, who have slipped through the sad curtain of memory loss. 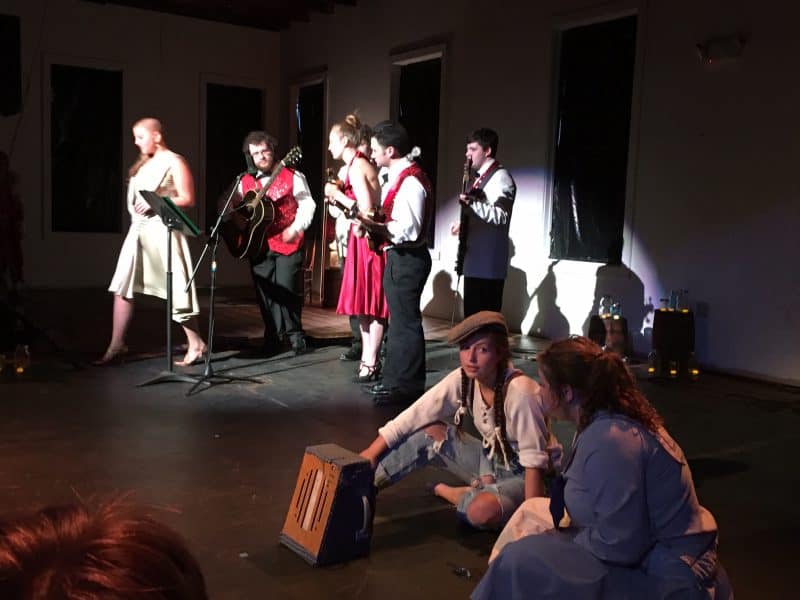 We meet not only the displaced, but the always grinning face of “progress. ” That would be Gov. Curly’s representative, played by Hope Wen, with his perfectly attired 1930s arm candy,  Gertrude, played by Janet Henderson. They gleefully chant about the great water that the parched city will receive after the reservoir has been created. “Clean Water. Clear Water. Cold Water,”  as the chant goes throughout the show.  The pair never loses their attitude, nor does Ma, who remains as angry as the grinning Wen remains upbeat…after all, a city like Boston needs a lot of water for its parched citizens.

The trees in the flooded Swift River Valley were cut down by Boston workers, patronage jobs happily dispensed by the urbanites who really ran the show. The displaced country folk of the now gone towns of Dana, Enfield, Prescott and Greenwich didn’t even get a shot at the jobs. All of this is revealed in song and dialogue, Ayers manages to fit a whole lot of fascinating facts into her emotional narrative.

The Swift River String Band, played by Mama’s Marmalade of Amherst, have an integral part in the show, providing haunting sound effects behind the painful words, and launching into many different songs and styles as they play what comes out of the radio as the two young girls huddle around the RCA.

Ayres’ dialogue is true throughout the play. She captures the hazy memories of old age perfectly when the grandmother recalls ‘peering into the blue, like those motes that stream down in the light of a swimming pool.’   At the play’s end, as a big dance is held on the eve of the four town’s official demise, farmer Doubleday reflects on the places nobody will remember as he recalls a boat trip across the new reservoir. “No one will remember you, the mountains will be islands, there will be no barns, no people. Only a plaque to show what was once here.

The depth of the material, the accuracy of the history, and the poignancy with which the cast portrayed the sad demise of these once-proud four Massachusetts towns all added up to a terrific night of theater.  I hope to see this production mounted in Boston some time in the future–might as well tell them like it was!