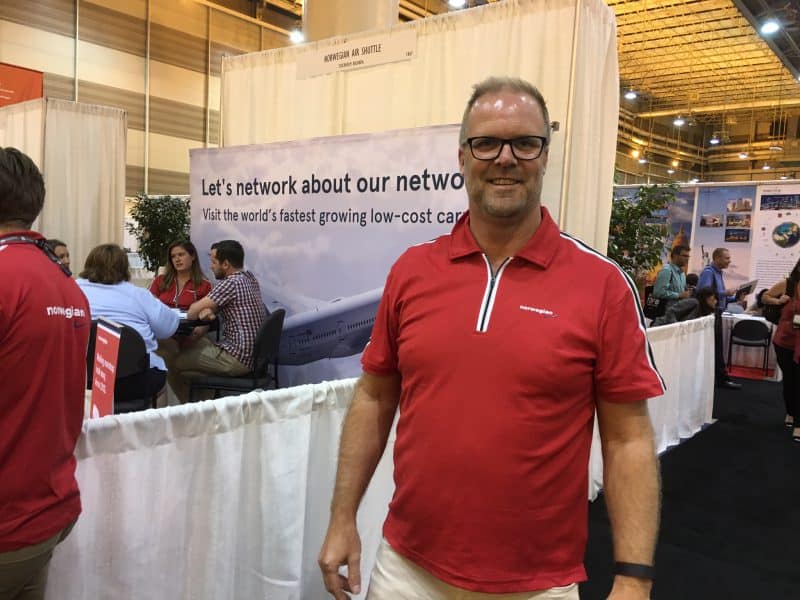 Norwegian Air Shuttle has a few secrets. One of which is flying very new airplanes to the most in demand destinations and points on the market. I spoke with two Norwegian executives at the IPW show recently about how they do it.  Their answer surprised me.

It comes down to the fact that flying Boeing’s newest and most expensive jets, the Dreamliners 787,  and very new 737s means significantly less fuel burn. Couple that with non-union pilots crew and ground staff and you save so much money that you’re talking a $40 trip to Europe versus what some of airlines would charge thousands for.
My dream is to see Norwegian air shuttle servicing Hartford Springfield airport because that’s my home airport and when that happens I’m gonna be taking a lot of flights on that wonderful airline.
My daughter wanted to take a trip last January and she jumped on Google flights and discovered that Norwegian flies to Guadalupe. She never had planned on going to Guadalupe but the $99 round trip made it pretty darn irresistible. Score another one for the big red airline it’s taking over the world one cheap trip buy one cheap trip.  I am planning on trying to get over to London for World Travel Market in November. Guess where I’ll look first for my airline tickets–yep, Norwegian flies from New York to London.
Goodbye to Screens as the Family Heads to our Summer Retreat Green River Fest Number 30: Rain Didn’t Stop Any of the Fun