Where better to learn new cooking techniques than in Paris?

Yesterday I learned quite a few new tricks when I spent the better part of a whole day cooking an elaborate meal with chef Fred Poulliot, at Le Foodist, a cooking school in Paris’ left bank. There were quite a few of us—two families with five children among them, Doug, a retired accountant, Natalya, a young woman from Puerto Rico and me.  Before i arrived they had made a trip to Fred’s favorite local market to pick up provisions and get shopping tips from the pro.  Bags in hand, I met them as they returned, and we began our cooking adventure by queuing in line to wash our hands and don disposable plastic aprons.

Properly attired, we wasted no time as Fred divided us up into teams and set up our stations.  Le Foodist’s location at 59 Rue Cardinal is in a two story location that once was a restaurant. So the big gas stove and the many steel-topped workspaces were ready to be occupied by students and not full blown sous chefs.  Doug and i would be peeling potatoes, but the spuds weren’t familiar.

Fred explained that these were a variety of potato grown near Paris, they had the very light skins of a Yukon but they had a size in between fingerlings and baking potatoes. It wasn’t long before we had filled up a container with the spuds, which Fred took and began boiling on the stove.

Along with the massive gas stove you would expect to find in a restaurant kitchen, however, Fred relied much of time on a small single burner induction burner.  “This is really the future of cooking,” he said. “You have way, way more control over the heat, and it takes seconds to go from cold to a full rolling boil. I predict that in the future, all restaurant chefs will be using these.”   While I’m not sure I am ready to ditch my dreams of a professional chef’s gas stove, he might have something there.

Among other ideas I got from the class was using deep steel cookie molds to form salmon into delightful little rounds. They go perfectly atop the pre-cooked turnips, which he prepared with soy sauce and sugar and then washed off.  It turns them into savory disks that can be paired with lots of good things. 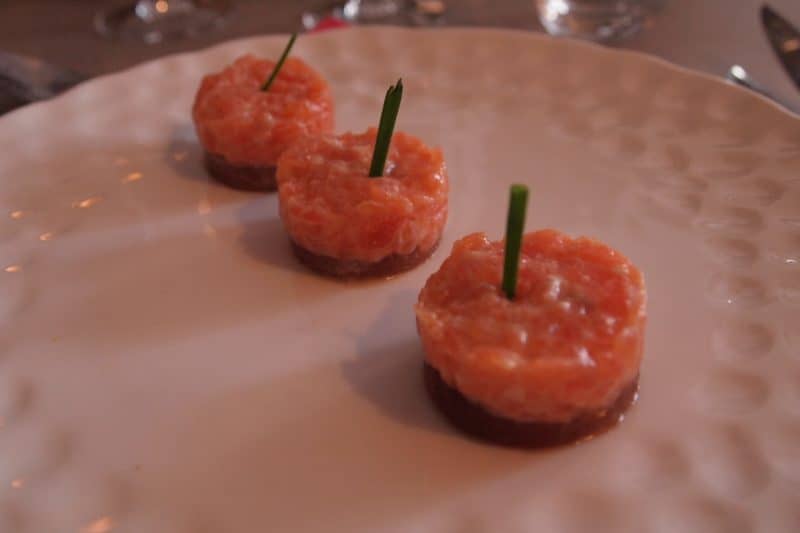 Fred also showed how portion out butter, sugar and other ingredients using a scale–so if it calls for 4% sugar, you use the scale to measure the weight of the sugar so it will work for whatever quantity you want. The small scales he used would come in handy in any home kitchen too.   Le Foodist, 59 rue Cardinal Lemoine 75005 Paris 33 (0)6 62 74 32 98

In Paris, It’s the Four Seasons George V, Or Nothing A Day and Night in Paris In Pictures