Stalin Museum in Gori: An Awkward Remembrance of the Native Son

Even before we reached the grim industrial city of Gori, my friends on the bus were talking about how much they wanted to see the museum there dedicated to its most infamous son, Iosif Vissarionovich Dzhugashvili.

When we got there, Joseph Stalin’s light green private rail car was what we saw first. He was afraid of flying and used this to travel everywhere.

The railcar, though, has none of the grandeur you might see in a car owned by an American robber baron–instead it’s a somewhat austere narrow space with small bunks for servants and a moderately larger bedroom for the Big Man. Around the corner were the imposing columns that marked the museum building, which was built between 1947 and 1955, on the site of twelve inhabited city blocks. These were all razed, with the exception of one tiny house, his birthplace, that was covered by a huge metal and cement roof to preserve it for eternity. 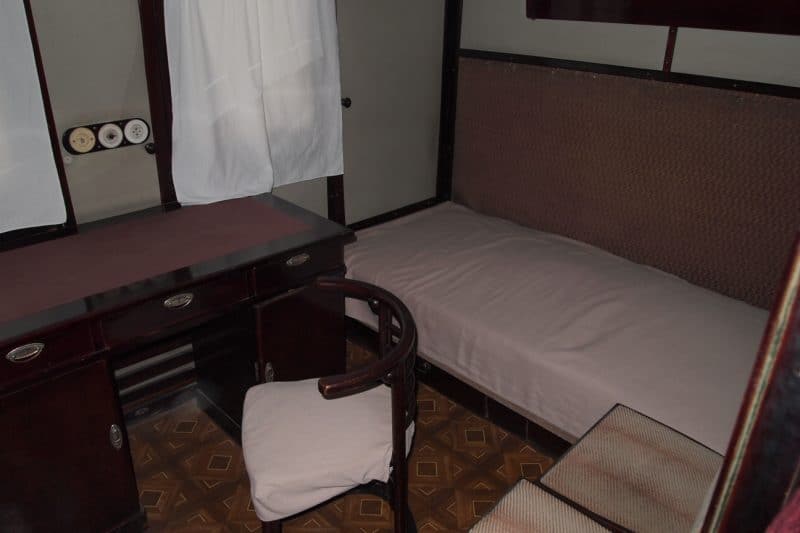 Inside this little house, actually only the left half, lived the boy until he was four with his mother and his shoemaker father who practiced his trade in the tiny basement..  Inside the museum, guards stared at their iPhones like the rest of the staff did, some watching Korean movies on iPads while the trickle of patrons viewed the dimly lit exhibits of black and white photos.

The guide who took us on a tour read a rote script from memory, pointing to photos of the young murderer-t0-be in the school chorus and after he left Gori to become a revolutionary against the ruling family and imprisoned.

We learned  later that not only was a gigantic statue of Stalin removed in the dead of night from the main town square and put in storage, it will someday be mounted on a pedestal outside the museum instead of in Gori’s main square.  Much of the hammer and sickle emblems and other Soviet era characteristics in the museum were removed several years ago.

Our guide told us about when Stalin’s own son was taken prisoner by the Germans in 1944, Hitler offered to swap the young man for a group of German field marshalls.  Stalin replied that he had thousands of sons fighting the war, they were all like sons to him, so how could he do that?  His son died in the prison camp. His second wife committed suicide in 1932, his first wife died one year after they married from Typhoid.

There was no time or chance to ask questions of our stern matron, and she recited the history without any emotion or  references to the burning issue of how terrible the dictator was to his people. I asked someone who had been to the museum before why it was so dark, we could hardly see the photos or read the  tiny English explanations. He explained that there is not much funding for a hated dictator who sent so many Georgians to the gulags after continuing to run their country.

After reviewing his revolutionary work with Lenin and seeing some of the gifts such as swords, pipes and ceramic likenesses, the tour ended up in the basement.

There we found out a portion of the truth about what the man did for his country.  Here you can see numbers that symbolize the men and women of Gori who were sent to death camps or just murdered, including a desk that might have been where a Soviet party official would declare your sentence.

In another room was a prison cell, with a realistic barred doorway and tiny bunks and a backdrop next to it showing a man pointing a gun. “We acknowledge that many mistakes were made, ” said the guide, pointing to the macabre display. It was an impressively minimal amount of attention to pay for a career that killed so many millions and induced the terrible famine which wrought such terrible pain in Ukraine and other parts of the USSR.

But it is at least a start.

Mtskheta’s Church from 603 ad, and Iago and Marina’s Feast Eating the Republic of Georgia: Some of the Country’s Favorites