Canoeing the Hillsborough River Near Tampa, Watching a Hawk and a Snake 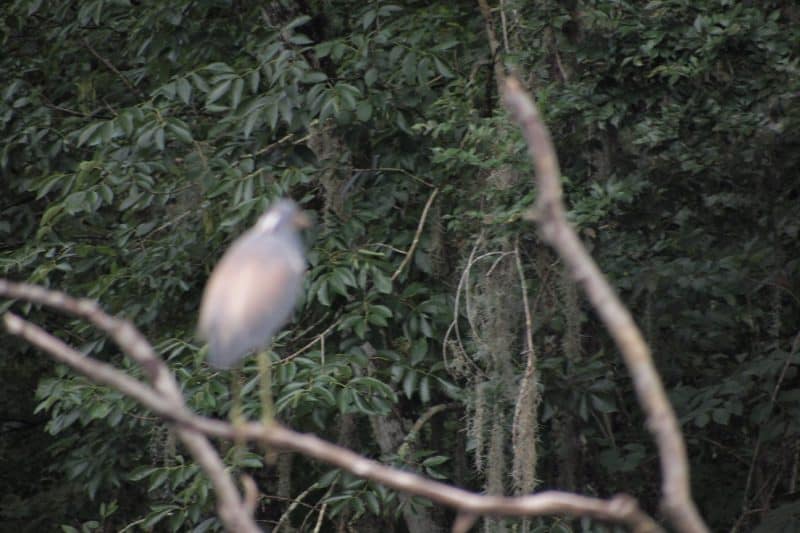 I am just out of the water after a terrific paddle down the Hillsborough river with Michael Cole, a guide for Canoe Adventures located near Tampa. The river is narrow, teeming with bird and reptile life, and was a joy to paddle from end to end. If we had stayed paddling we could have gone all the way to Tampa!

As we set out, I knew we’d be seeing a lot of birds after the first Great Blue Heron calmy flapped its wings and lazily loped away in the air the way those big birds so.

He was relaxed, unfazed by more of these humans in canoes, and only flew a few hundred yards before settling down once again. Near the heron, an ahingha dried out its wings, stretching them as wide as he could. They don’t have oil so they need to dry their wings like cormorants do.

Mike took care of the paddling in the two-miles-per-hour current, as we would our way past submerged and visible trees, some of them showing marks where they were cut away by Canoe Escape staff after storms. It was completely quiet except for the cicadas on and of whine and the chirping birds who kept up quite a din.

At one point we saw the leaves rustle in the forest near the shore and we saw a feral wild pig dashing off into the woods. Later on as we came around a bend we saw a red-shouldered hawk on a downed tree. Right below him was a yellow snake who had a frog in its mouth. You could tell that the hawk was thinking about dinner, eyeing his prey as we stood stock still. The snake slithered away

from the tree still holding the frog, and the hawk flew up to a higher branch, his steely eyes still locked on the snake. But the reptile managed to elude his avian foe, and after some photos we moved on.

After the paddle, I met up with Maddy, my driver and I offered to take him to the local barbecue joint, called Mike’s Smokehouse. It was the real deal–three police cars, a bunch of pick up trucks, and men hanging out under a tree sipping sweet tea. Mike himself was at the counter, and later he came around and offered everyone a chocolate cream dove candy bar. He said that he some of the locals told him they wouldn’t patronize a place with “people like you” because Mike serves beer. I guess in some places in Florida, this means you’re a bad person and you don’t deserve to be patronized.

The pulled pork was tender and the sauce had a nice kick, and the best thing were the sweet BBQ beans. No complaints from this Yankee, Mike, and go ahead. Serve the next guys in line a tall cold brew!