A Day on Indian Arm aboard the Oceanwatch 2: Nature and Scenery

Many of the world’s greatest cities are located right on the water.  Vancouver’s waterfront is one of its greatest assets with ferries of allsizes crossing many different routes.  Yesterday we drove up a little bit north of the city to the lands of the Tsleil Wautuh tribe and met a few of their members. It was time for an excursion on a 42-foot steel boat called the Oceanwatch 2.

There are about 60 different excursions offered by members of British Columbia’s more than 200 First Nation tribes, and this was a shakedown cruise for a new offering that combined an outing on a boat with a chance to hear about how native plants can heal us, as well as a lot of the history of our destination–Indian Arm.

It was a typical day in BC–sun trying but failing to peek out of the clouds, and intermittent yet non-threatening rain. Just a little bit of drops every so often.  Thirteen of us set off a dock in Cates Park, men were crabbing on the dock and we began with a native song, sung by Dennis Thomas and Cease Wyss, who operate Takaya Tours.  The company offers a wide range of kayaking and educational tours and they’ve paired up with boat captain Mitch Bloomfield for this new adventure.  Indian Arm is a narrow fjord that winds up 12 mi

les and is surrounded at its mouth by dozens of homes with Dr Suess-like stairs piling down from their steep perches to the water.  Dramatic glass windows and four stories of decks were all over.

A highlight of the trip was a chance to see the old native petroglyphs, markings etched on the sides of rocks more than 300 years ago.  Up on a tree an eagle perched, waiting for his next meal.  We motored up to the end of Indian Arm and at the end is the Wigwam Inn, which was notorious as a gambling den, brothel and the one-time stomping ground of many gangsters.

We dismounted with Cease and Dennis and she showed us many plants and how they can heal, and we got an up close look at two old 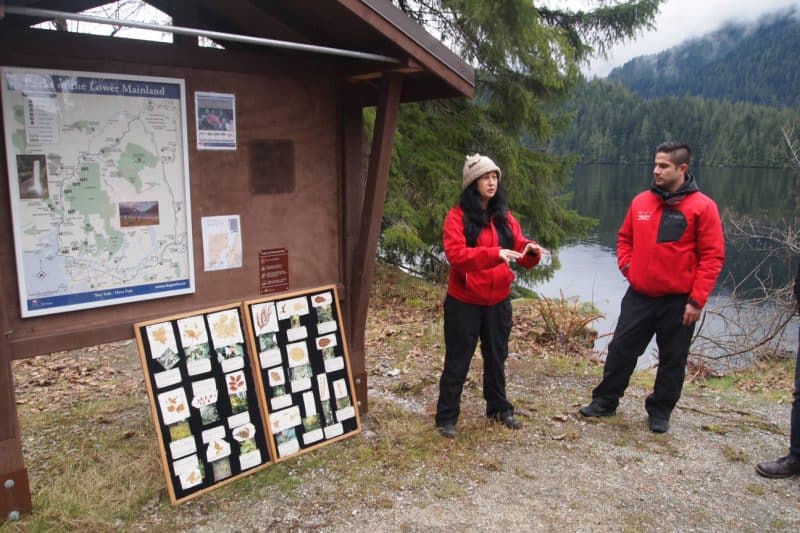 power plants, one inactive, that generate hydropower by piping water down into the fjord from a lake way up on top of the mountains.

This tour gave a great chance to see BC’s legendary forest land and water, and the only thing I’d add are a few fishing poles so we might have been able to catch some lunch.  They included sandwiches, chips and drinks which were just fine too!

Want to Know Where to Go in Vancouver? Find BCRobyn! Biking Vancouver: The Seawall and the Beaver Pond