Ben Garfield Would Go Fishing Every Day, Even If It Wasn’t His Job

With seagulls as alarm clocks and the sea all around us, it’s damn hard to stay in bed here in Camp Ellis.  Yesterday morning I thought for sure it was 7 and it was just 5:30 am. Time to get out to the porch and check out the sea.  We had an early morning rendezvous with a local charter fishing captain, Ben Garfield, and by 7:15 we were on the deck at the South Portland Marina to meet him.

For the past 16 years, from June-September, Ben’s been going out fishing seven days a week, and the only days he gets off are when he doesn’t have a client. I asked him about whether he used a fish finder and his reply was quick. “People who spend a lot of time staring at the screen aren’t fishing. I use time and tide to catch stripers, and I use a log to keep track of what we caught where.” I suspect that when he’s not working, his hobby is fishing.

Ben has an easy way with his charter guests–using first names, joking around, and making everyone feel they’re in good hands. A youngster with us on the trip was dubbed ‘troublemaker’ and Ben took delight in reminding his dad that grandpa had hooked the first striper, not him.  It was a mirror finish ocean as we cruised out of the marina beside the oil pipeline head where gas and oil are sent up to Montreal. Our first stop would be the mouth of the harbor, near Portland Headlight, where Ben threw a basket of cut-up mackerel over the side to get the attention of their brethren.  These little fish, 6-8″ long would be our striper bait.

We cast light tackle rods with four hooks apiece over the side and soon we were reeling in dozens of mackerel, which are the favorite food of the denizens of the Maine seacoast. “I like to keep the bait lively, so we need about 50-70 of these, because using lively live bait is the best way to catch stripers,” Ben said.  He deposited the wriggling mackerel into an onboard tank. We would end up using nearly all of them in the next four hours.

There aren’t as many charter captains here in Portland as on the Cape or Islands in Mass. His prices, too, reflect a different economy, Portland is not a major tourist town, but people do pass through, he said. It costs $325 to hire Ben for a four-hour offshore excursion for stripers, and $850 if you want an all day trip, 18 miles off the coast to hunt for shark and tuna. He’s hauled in  700 pound blue fin tuna and said that many times when clients hook a big shark, they let them go, not interested in eating even the mako’s meat which is similar to swordfish. 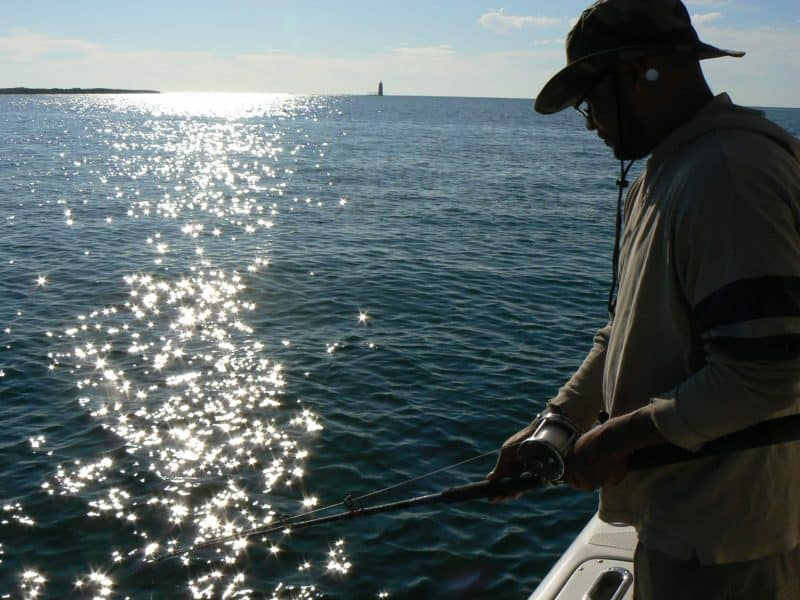 With our bait tank full, we headed over to the first of several spots close to shore where Ben suspected we could find striped bass.  First, just off Macworth Island where we spotted joggers running by up on top as we cast lines with the boat about fifty feet from shore.

A few other boats full of casting fishermen confirmed that this was a good spot to find passing stripers. “They come out of the Fore River and swim close to the shore,”  said Ben. We cast out live mackerel toward the shore, wriggling on the big hooks , and then hit the bait runner switch on the reels to allow them to move freely. “Live bait works best,” said Ben.

To my son-in-law’s irritated chagrin, Maine fishery law makes having a meal of the tasty striped bass a pretty tough feat. That’s because you can only

keep fish that are 20-26″ and over 40″.  In not too long, we hooked our first striper. The telltale sound of the line zzzzzzzing out told Ben all he needed to know. “Keep your rod tip low, go up a little and then start winding,” he said, obviously happy to see we’d hooked one. ” Don’t bring it up too high, just wind, on the down motion, and keep reeling.

The heavy fish fought all the way, and after much winding we caught a glimpse of his shiny striped body as he flashed by the side of the boat. “Maneuver him over her, ” said Ben, plucking the big fish out of the ocean with a net.

As I feared the fish measured 31″ and after a few photos, he was free to swim away. “That’s two weeks of eating!” cried Francisco, wondering if we really, truly had to obey Maine law on this sultry July morning.  But Ben was resolute. “I’d throw them back if it was the middle of the night and I was 10 miles away from shore,” he said.

After Beach and a Shower, I’m Officially on Vacation Who Do You Run Into at the Green River Festival? Everyone!