How would you like to live in a real-life castle? We met a man yesterday named Sebastian de Varitault, who actually does…his family has owned the Chateau de Roquetaillade for the past 700 years. It’s not all knights and fun, he told us, since they receive no assistance to maintain the massive property from the state, and it needs $2 million euros of work.

With twice as many visitors as some other chateaus in France, he keeps it running with just two employees–along with his wife, son and his mother. They eat lunch in the kitchen, where he showed us a 15th century ice cream maker and on the walls were giant copper pots and pans. “We live upstairs from here, I won’t show you that part,” he explained.

But he did admit it’s kind of fun knocking around in a place like this. The chateau is located in Mazieres, and looks just like the castle a kid would build at the beach, with the towers and drawbridges and a dry moat. In the rooms behind the two-foot thick walls he showed us priceless heirlooms such as a piano layered with sheets of

ivory. Once he was rooting around in the cellar and found a painting of Hercules that dates back to 1599!

Since 1993, he’s lived here and now relies on volunteers to help out with the daily tours. The legendary French architect Viollet Le Duc did a lot of the designing, he who was also famous for some of France’s most important palaces and edifices.

On the ceilings, Le Duc painted intricate geometric designs, and in one room a carved man stares toward the bed while on the opposite side, a woman turns red and looks away. He had a good sense of humor, Sebastian said. 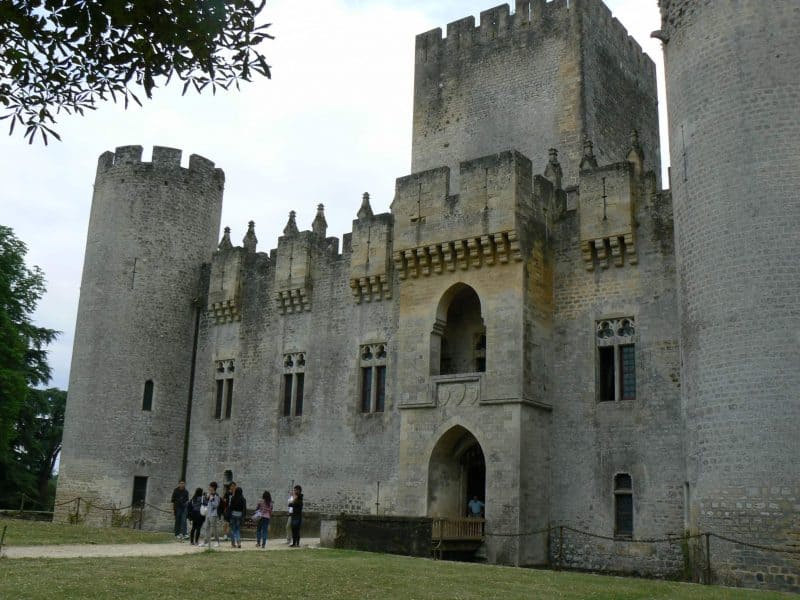 Cruising to a Picnic in a Classic French Ride Screw Top Wines in France? Oui, Oui!