Who Was The Man Who Saved Me? HGW Gets His Recognition 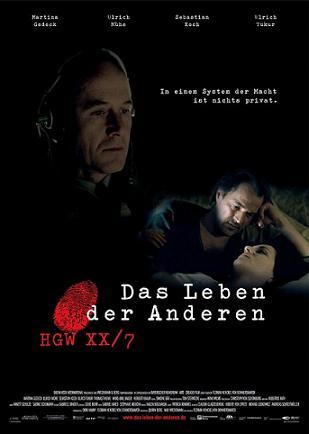 Last night’s mancave movie was my all-time favorite, The Lives of Others. Devorah asked me why it was my fav, and when I answered, it gave me some new insight into what makes a great movie.  It was that the central character, Wiesler, who is such the epitome of evil as the cruel Stasi interrogator at the movie’s beginning, makes such a change, and in such subtle ways, we are treated to him blossoming as a feeling, understanding human being.

Life in East Germany is full of paranoia—we see an early example in the Stasi newbie who makes the error of telling a course joke mocking Erich Hoeneker, the party chairman.  Later he joins Wiesler in a basement steaming open people’s mail as punishment.

The subtle way the writer Georg Dreyman rewards his savior, Weisler, too, is satisfying.  He tracks him down after seeing a bloviating disgusting former party official who once ruled the country who tells him that of course, he was being recorded and watched for years.  Dreyman digs down and finds the initials HGW, and wonders ís this the guy who saved me? Why didn’t they find the typewriter hidden in the doorsill that was used to create the subversive article about suicide in the DDR?

The answer was clear….from the red fingerprint left in the final volume of the survellilance notes.  Following along in a taxi Dreyman sees the former Stasi agent, now a mere postman. So that’s who he is, he thinks. And when the last scene reveals a dedication in Dreyman’s new book,  “To HGW XX/7, with gratitude”, we see the connection.