I sometimes actually say prayers when I’m taking off in a plane. The other night we took off in a 67-seat ATC turboprop plane for a short flight from Santa Maria to Sao Miguel. It was that old story ‘rain slicked runway’ and I kept imagining the headline about how the plane veered off said runway killing 67. But happily, when we landed 25 minutes later it was not raining.

Today I had to look anywhere but straight ahead as we drove to the far western side of Sao Miguel, which is the biggest of the Azores with about 80 kilometers of length. It was up a winding mountain road and there was such thick fog that visibility was next to nill. Our driver wasn’t at all perturbed, but there I was cringing, looking the other way, and just hoping and praying that nobody would stray into our lane and dash us all to bits.

We finally made it out of the fog to to the dramatic tip of the island called Ponta do Escalvado, overlooking another lip of land called a fajo, created by lava pouring down a cliff and spreading out to create more land. There is a whale watching observation tower here, where people with binoculars and radios tell the boats where the spouts are happening. The windy promontory overlooked cliffs so far down it made me dizzy; then a busload of Finnish tourists backed up and the area was suddenly packed with clicking shutters and whirring video cams. 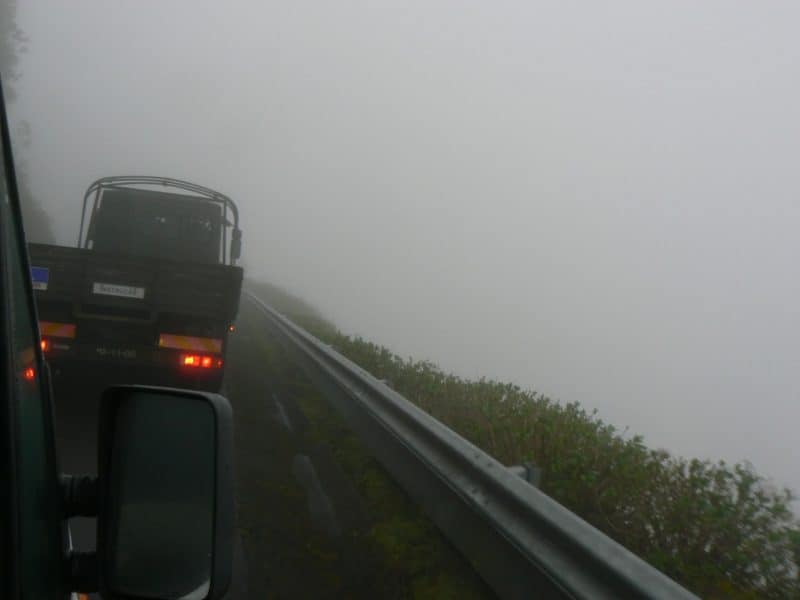 The scenery here in most of the villages is the same round geology as on Santa Maria. Almost no where is the ground level, it’s all humps, bumps, valleys, dips and hills. The houses are mostly painted the same color–white stucco with blue trim, and everywhere are cows grazing. We rarely saw any crops planted besides a few potatoes.  So fertile, yet, everything continues to be imported instead of home grown.

Our meeting with the minister of tourism Miguel Cymbron this morning gave us a few nuggets of information about which direction tourism promotion will go. It will steer more towards the giant German market, and continue to push the Azores in the US, Scandinavia and Britain. A new web 2.0 website will be launched soon that will give travelers the chance to ask questions, watch videos and interact with the site, said Cymbron.

All the Way to the Azores, the Health Insurance Myths Prevail He Got His Start Washing Dishes in Lisbon