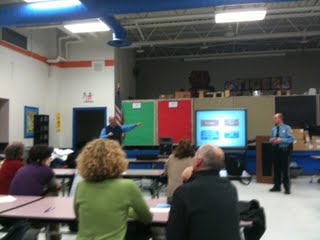 Last night a meeting was held in a Holyoke elementary school, gathering people together who live in Ward 7. It was about forming a neighborhood watch, after many of us had been burglarized. When the official from the Sheriff’s office asked who had been broken into, a majority of people’s hands went up….incredibly, more than two thirds of the gathered crowd of about 80 people had been recent victims of crime!

One street, Fairfield Avenue, seems to be the epicenter. Again and again we heard people tell their experiences with daytime burglaries, or in some cases, people breaking in at night and scaring the wits out of them. “Who can guess how many patrol cars are out on the streets between 4 and 11 pm? asked the official. “Six.”

That means they depend on people to call police, or to provide information on the anonymous tip lines that they man at the Ludlow jail. One woman said she had moved to Holyoke a week ago, and she lives on …Fairfield Ave. She hasn’t felt safe since hearing about all of the break-ins, and she was distressed to hear even more details.

The Sheriff’s official advised that people should close their blinds, so as not to tempt bad guys with their big screen TVs and other stuff, and that bushes provide good hiding places for those in the process of breaking in. “But we are all in this together. We have to look out for each other. Get to know your neighbors, know who lives to the right, left and across. That’s how we can make this work.”