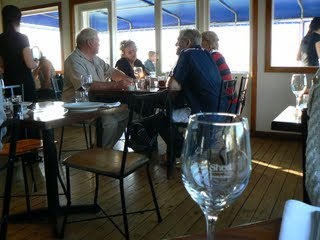 Some of Daniel Monopoli’s best food memories come from his Italian grandmother’s kitchen, at their family summer house on the beach. One particular memory is a succulent veal flank cooked on a George Forman grill drizzled with a Sorrento lemon and some chili. Simple food appeals to this young chef, who’s made a name in just a few months by opening the Boat Shed Cafe on the waterfront in Nelson.

We sat with Daniel on his night off, as the restaurant revved up for another busy shift. He talked about his new idea, called “Trust the Chef,” that brings out five or six mystery dishes, so that everyone is eating throughout the evening. “It’s not for everyone,” he admitted. But Daniel likes the share and sample way of eating, despite the fact that here in New Zealand, locals often expect a full plate with the requisite meat, starch and veggies. He likes the movement and the idea that lots of different dishes arriving one after the other allows a more relaxed flow and promotes conversation.

We asked him about the way he does business, and he told us that he puts the whole staff on salary, despite the ebbs and flows of summer versus winter. “That way they know they’ll get the same salary all year, and it keeps the turnover very low.” Everyone in the kitchen is on the same team, everyone cleans and he’s flattened the hierarchy. Despite the legendary belief that no one in NZ likes to tip, he believes that it’s only fair to throw in some extra for great service. He pools the tips including the lowly dishwasher.

He has fond memories of a visit to America where he passed through Austin Texas and bought a 1965 Chevy Caprice. He drove it to California and shipped it back to Nelson. Time spent in Thailand gave him a keen appreciation for presenting food simply, and letting a great piece of fish work its magic without a host of piled up garnishes and heavy sauces.

He can be tough on his fishmongers, demanding the peak of fresh and only stocking 3-4 kilos of each. They run out but while they’re available they’re as good as they can be.