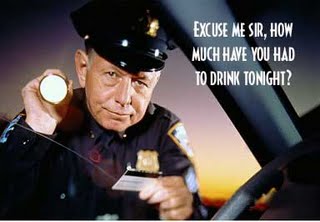 My late night ambitions have been proven weak lately. I’ve contemplated going out on weekend nights, but have found reasons to stay in. Last night we dined in Northampton with another couple who at 9:45 were eager to get over to the Iron Horse for a 10 pm show.

No way we would follow in their shoes….just thinking about staying up past midnight in a club exhausts me, and I can just see myself nodding over, my head bobbing while the music that I paid to hear plays in the background.

It takes a little getting used to, this accepting that my life now exists between the hours of six am and about 10 pm. After that, hey, I just don’t really wanna be out there.

I read in the paper about a woman I know who is an upstanding citizen, teacher, and not what I’d consider a big drinker. She got popped for DUI and now faces that terrible littany of hassle: from having to get a ride the long way to work each morning, to facing huge cost increases for insurance, to the scorn inevitably that will be heaped on her for making a poor choice, beginning with that dreaded ‘marked lane violation.’

I once had a similar brush with the law…weaving back to the Youth Hostel in Martha’s Vineyard in 2000, pulled over and faced those terrible blue lights. After an ordeal involving handcuffs and a wait in the station, I blew a .07, and walked out a free man. But that bullet dodge was long ago, and so, tonight it’s unlikely that I will be going out in my car after drinking. It’s just too much of a possibility and too much of a bummer if it did actually happen.

Why Google Rules the World Art Tatum Never Sweated, and So, Wasn’t Loved