A Second City Where Arts and Dining Come In First 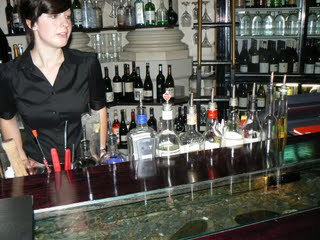 Logan and Brown are the two last names of a pair of famous chefs known far and wide in Wellington, a city of about 180,000 where arts, culture and especially food are at the top of their game. The pair opened in a converted former bank building on Cuba Street, the downtown’s most lively thoroughfare lined with cafes, clubs, art galleries and of course more fine restaurants. In 2009, Logan Brown was voted the restaurant of the year by Cuisine magazine for all of NZ.

We joined Rebecca Mitchell, a city marketing manager, and Stacey Turnbull, who curates and promotes City Gallery, at a table at Logan Brown and we talked about what makes this second city the center of arts and culture in New Zealand. “There is more professional theater and art galleries, plus lots of live music her 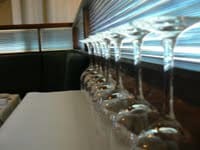 e, helped by the two universities and a population that loves eating out and going out very much,” they told us.

Rebecca, 26, confessed that her budget for fine dining and fun is high consuming most of her paycheck, and in fact that is the topic that’s on many people’s minds here these days. The cost of living is going up while many employers have signed contracts with no raises for up to three years.

Thing are expensive here–takeaway coffee is $3.50 or $4, wrapped sandwiches are $8-10, and a special dinner menu at Logan Brown’s bistro is $49.50 per person. The dishes, like the turkey confit, meltingly delicious meat on top of savory squash, and a side of tiny 2″ portobello mushrooms, combined with the ambience of the intimate octagonal building’s interior was lovely.

It was a Monday night, and the place was filled up with locals eating and drinking and sitting at the bar that’s made of glass and filled with living sea creatures like crayfish. “Some people joke about Welliwood, a silly name that began when mega-director Peter Jackson began his series of blockbuster movies that seemed to include half of the city as extras.

More excitement is promised when Jackson begins filming The Hobbit at the Weta studios next to the ocean in Seatoun neighborhood. Despite the big names, the director cherishes the low-key nature of his fellow Wellingtonians, and that’s why he keeps making great movies right here, in New Zealand’s second city.