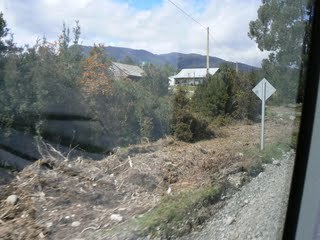 At the big closing party, I ran into an earnest young man named Jimmy Langman who lives in Puerto Varas and makes his living as a writer. He’s got a dream, and he won’t let go of it. I am guilty of pouring lots of cold water on his idea, but this morning over breakfast I got a chance to read his Patagon Journal website, and I liked the strong pro-environment stance and the general look of it. The website might have a chance, but I told him that print was a bad, bad idea.

He told me that he wants to build up his website’s readership to 40,000 visitors a month. Now only about 500 make it to the site, but it’s still a new project. I told him about how he’d have to get hundreds, or better, thousands of links, and that to attract readers he had to work non-stop by publishing new content, and doing newsletters, RSS feeds, and blogs. I told him that it was a very steep curve, and that the best way to get anywhere in web publishing is to buy an existing trafficked site and piggyback on that traffic to build it up. “What about a print magazine,” he said, that’s what I’d like to do…printing is really cheap down here in Chile.”

He met a man who works on Vermont Life, the glossy photo-filled house organ/magazine of Vermont tourism. “They sell 80,000 subscriptions, and don’t rely on advertising,” he said. I told him that this was a 50-year-old magazine that’s subsidized by the state, and that readers outside of Vermont are easy marks for all of those colorful maple trees and sugar on snow stories. “But this area is just as beautiful as Vermont, surely we could get people to subscribe,” he countered. I said that he might indeed sell some ads, but that sustaining it would be brutal.

I reminded him that Conde Nast is chopping titles, big metro newspapers are suffering cutbacks, and that starting a print magazine isn’t a good idea, especially if you’re scraping by as it is. He remained undaunted, and continued to press on. “How about as a nonprofit entity?”

Northern Patagonia does merit a literate and eco-friendly web publication to rally the many locals and tourists who love the place and want to show it off. Maybe he should pitch the local tourism people, like Vermont, they have the government dough, and maybe they’ll help him with his dream.