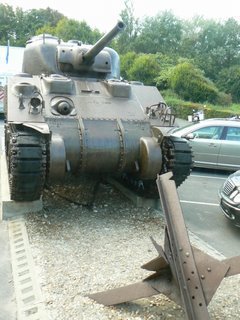 Here in Longue-sur-Mer, a Sherman tank rests next to one of the thousands of metal barricades put up by the Nazis to stop the invasion. The business of showing tourists these D-day attractions comes in third for popularity in Normandy, after Mt. St. Michel and Honfleur.

At Arromanches, we joined a herd of bus passengers and saw the remains of the artificial harbor created by dragging hundreds of cement caissons over and sinking liberty ships. Just enough remain out in the distance to show the shape and size of that man-made harbor, where long bridges were set up to drive tanks, trucks and guns onto the shore.

We scampered inside the former pillboxes and saw four cement batteries, two with the rusted 155 mm guns still inside. All of this elaborate machinery and construction to defend what was ultimately not defendable. We learned that most of the French farmers here between 1940-44 were forced to work in labor camps, so they couldn’t trim the roadside hedges, so they were overgrown. The soldiers relied on their clickers to determine whether friend or foe lay on the other side. Cows played an important role since many of the fields were mined, and the animal’s natural curiosity would draw them toward a hiding sniper.

It is remarkable to me 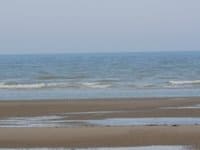 that so much of this place is still just open farmland, as far as the eye can see. Despite this influx of millions of tourists on buses, the simple agricultural economy continues, though I’m sure it pales in comparison with what is generated from tourists who pay 59 euros apiece to get a four-hour tour of these sites.

Here is a shot of Omaha Beach, where the highest number of casualties occurred, it’s one of the widest and longest stretches of open sandy beach I’ve ever seen.