Obama "Gets It" on High-speed Rail & Other Necessities 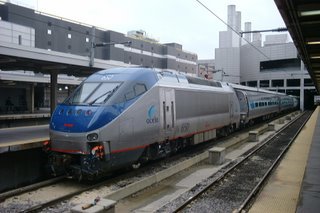 As the snow swirled around me this morning, I got a lot done here in my office alone. It’s funny because I used to think of how sad I was that Cindy before she had her assistant, would have to be by herself in the office. Today Í love it, conversing with people around the world, talking about traveling to far-flung places. But in the newspaper today was a story that made me excited. It’s about the quantum leap and true progress that we’ve made regarding high-speed rail and other transportation options.

I wrote about this in the Valley Advocate last August…and now part of my hopes are coming true. I talked about how lamentable our trains and other transports are…and how the $4 gas was getting everyone juiced up about changing. Neil Peirce wrote “High-speed Rail an Obama Issue,”about how our new president made sure that $8 billion for railway work was included in the stimulus bill. The change in attitudes at the White House, he writes, couldn’t be more dramatic. We had Bush suggesting we ‘zero fund’ Amtrak, now we “have a president who absolutely, positively gets it.” gushed James RePass, of the National Corridors Initiative.

Obama, said Rahm Emanuel, ‘wanted to have a signature issue in the bill, his commitment for the future. This is it.’ I can’t wait to ride America’s trains some day.

Chip Tracks Down the Dog Owner and the Realtor Arts in Franklin County? Or How To Promote Your Book?