Foley Alabama Brings their Heritage On the Road 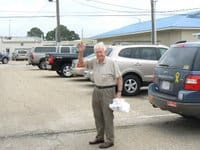 The town of Foley Alabama is truly a little engine that could. Kathy Danielson joined us on our bus and introduced us to this vibrant and creative town about 30 miles south of Mobile. She runs the visitor’s bureau for the town of about 10,000 and talked about some of the ways she’s managed to get more than five million visitors there every year.

One idea that really put Foley on the map was when they began Heritage Harbor days. Instead of just having their own festival, they reached out and brought an Oklahoma town to Alabama and show people all about chuckwagons, cowboy songs and cattle. Then they did the same up north, driving a shrimp boat and bringing Foley’s gospel choir a long day’s drive north to Oklahoma. The next year, they did the same thing with Grapevine Texas, then Ozark Missouri, and other faraway towns. They set up their visitor’s attractions in Foley and then sent Foley’s attractions up in Texas and Missouri and Tennessee.

It gave Foley national attention and jazzed up the festivals for both home and away participants.

Then they sent out emails to everyone on Google they can find with the last name of Foley and invited them to come to town for the festival. Many families did. And when the terrible hurricanes Ivan and Katrina hit the towns, their festival exchange friends came through with truckloads of supplies, reaching out to help Foley in their darkest hours.

They bring in a truckload of snow every December to show their kids what it’s like to play in the white stuff. They’re working on a father’s day balloon festival. In short Kathy and the people here may be tight on money, but they’re full of great ideas that really bring people to town and get the town working together.

For our visit they rounded up interesting local people to share their lives with us. One was 96-year-old Gus Schultz, who still mows his big five-acre lawn and is walking around spry and lively. His brother-in-law his him beat, he’s 98 and still going strong.