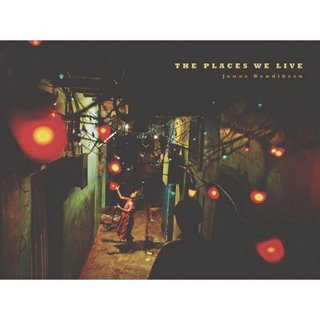 Yesterday I stumbled upon one of the coolest things I’ve seen in a long time on the web. It was a site called “the Places We Live,”by Jonas Bendiksen, an art project that tells the first-person stories of people who live in some of the most crowded and dangerous cities on earth. One by one, lives are described in tiny apartments in the slums of Nairobi, Mumbai, Caracas and Jakarta. The site opens with an ambient soundtrack of a city’s noise, bustle and hum.

You open it to find a rundown section of Mumbai, and a quote from the girl walking down this littered street. This is the place I live, she says. “If we tell people about our house, will anyone believe us?” In 2008, for the first time in history, more people will live in cities than the country. Huge photos of slum skylines show where most people live now in the world.

Then I clicked to the section about Kibera, East Africa’s largest slum, and the families who live there. Again we hear the sounds of the street, beats of music in passing cars, people talking and walking, people speaking into cellphones, cars passing.

I clicked into the Arori household. The screen pans 360 degrees, showing the tiny room where ten people live. The walls are decorated with newspapers, there is one bed and there is one window. “We squeeze ourselves into this one bed,”says a man. “We pray to god that we are not going to fall prey to disease or be suffocated. I earn less than one dollar per day, but I am happy in my neighborhood here.”

I clicked through to another family, this one is Caracas. A young-looking girl said she is the mother of four. And that she never lets the kids go outside, it is too dangerous. They stay inside their tiny apartment all day long. It gets hard, she said, hard to have them in such a small space. But outside there are criminals and so they are afraid.

I felt a pang of sadness when I thought about this book while dropping off my dear grandson Nathan at his preschool. The yard where we live is safe, full of toys and leaves. The school is well lit and airy, and teachers care about each of their charges. Our lives here are so full of plenty and safety and good food….we take it for granted. But when I read about the lives of others just as deserving as us, who suffer and live like prisoners in tiny apartments, it is sad.