"All We Have Is Pasta and Pizza" Say Italians 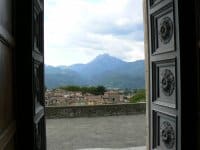 I joined my mom and dad out on their enclosed porch to read a New York Times article about the malaise that is modern Italy. The sleet rained down and it’s quite cozy in here.

It seems that everything is going wrong in Cindy’s adopted country…from Europe’s lowest birthrate, to the lowest internet adoption, to the lowest rate of US investment, and a tangling, choking web of bureaucracy that is leaving Italy behind the rest of Europe.

The story by Ian Fisher includes an interview with Beppe Grillo, railing about the terrible politicians, as he calls them a ‘whole stinking kettle of fish.’ He burst on the scene on Sept 8, when we watched him on TV in our hotel in Pisa, when the blogger and newspaper columnist called for a Day of Rage in Bologna. He’s had enough and he is mad as hell.

The story cited many other examples of how Italy has fallen…lawmakers who are driven around in chauffeured cars, so many convicted criminals in government, and a general sadness among Italians who are just sick of a government that is paralyzed. Everywhere there is evidence of Europe’s most aging population, no toddlers in prams, just old people sitting in parks, no cutting edge cinema, or art, nor world renowned music. Nobody is starting fantastic companies in their garage, instead, men of a certain age are living with their parents.

When Pavarotti died, it was a dagger in the Italian heart. “Now all we have is pizza and pasta,” said a young student.

You Think It’s Expensive Here to Ride? Settling in to the Hotel Hellsten in Stockholm