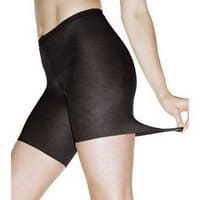 Sara Blakely is the women who invented Spanx, a pair of cut off panty hose that shapes tummies and thighs and is now a $150 million company. She was interviewed by BusinessWeek’s Stacy Perman and the last two questions were the best.

You’ve said that failure was a huge part of your success—how so?

Because I failed the LSAT. Basically, if I had not failed, I’d have been a lawyer and there would be no Spanx. I think failure is nothing more than life’s way of nudging you that you are off course.

My attitude to failure is not attached to outcome, but in not trying. It is liberating. Most people attach failure to something not working out or how people perceive you. This way, it is about answering to yourself

What’s the best piece of business advice you ever received?

It probably came down to my father. When I was growing up, he encouraged us to fail. We’d come home from school and at dinner he’d say: ‘What did you fail at today?’ And if there was nothing, he’d be disappointed. It was a really interesting kind of reverse psychology. I would come home and say that I tried out for something and I was just horrible and he high-fived me.

If you had it to do over again, what, if anything, would you do differently?

Nothing. I believed in and I trusted my gut and honored it through the whole process. Our gut is a real guide and when we regret something it is usually when we are not acting in accordance with our gut feelings.

How did you maintain your confidence when doors were closed in your face, when people didn’t get it and said “no” frequently?

I was my own focus group. I had already tried the product and I saw what it did for me. I knew if they said “no,” I just said they didn’t get it. I never second-guessed the product. Before it was actually made I did hear “no” a lot. It was very discouraging. At times I stopped out of discouragement, but I never lost confidence in the fact that it was a good idea.