Visiting the Site of Napoleon’s Trysts 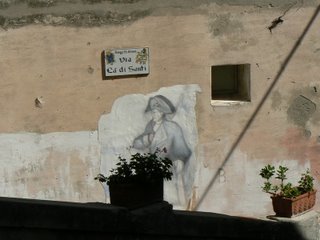 We took a long walk this morning up to the top of Madonna del Monte, the tallest peak on Elba. There is a chairlift that brings people up, but we took the path that is marked by 14 little white stone domes–stations with pictures of Jesus that look like phone booths, along the faded concrete steps that line the way.

Our excellent guide, Tatiana Segnini, a lifelong resident here, had time to share some of the lore of Napoleon, who spent a few nights up here with his lover Maria Velesca, just a short time after he arrived on the island in May 1814. He worried about her safety during a storm when she left, and he didn’t mind the spartan setting–he was there for love, and he was a military man, after all.

Tatiana told us that he suffered from ulcers, or stomach cancer, hence the constant clutching of the breast. And that he was frustrated at his sentence to be exiled here, and tried to poison himself unsuccessfully. And that he spent his last six years exiled to yet another island, even further away, St Helena off the coast of Africa. But by then he was a prisoner, not a King as he was on the French controlled Elba. when he came for his famous nine-month stint.
Napoleon came to Elba without his wife, Maria Louisa, and he wrote her letters every day. But his father-in-law, Austria’s King, never showed them to her and eventually she took up with another man. The emperor was busy here–funds were cut by Louis the 18th, who despised him, so he had to raise taxes and he helped establish schools, hospitals, and a working economy.
He gave this island a lot, mostly the fame and notoriety that would live on for centuries. And the silly palindrome that everybody says when you tell them you’re going to Elba.
Espresso, Tuscany Style To Cavoli, for an Italian Beach Day on Elba