Getting a Cheap Suit in Medellin 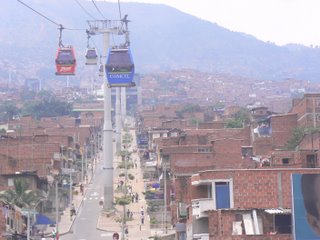 Last night we had a farewell dinner with our Latin American friends, who were meeting in the lobby for a 3:30 am departure. Ugh! Our host was the General Manager of the InterContinental in Medellin, Tony Ruiz.

As he began his little speech to us in Spanish, he looked over at Shoul and I and said “can I speak English?” and we enthusiastically said YES! He is from Miami and has been the GM here for five years. We asked him about what it felt like to go from Salt Lake City to this city in Colombia, and he said he and his wife have enjoyed it. He explained that in the hotel business, you just never know where your next posting will be, it’s like the army. Security, while mostly unseen, is a huge part of the job here. He says he has businessmen from the US every week exploring investments here in the booming Colombian economy.

We asked him about the city and one of the things he mentioned was that this is a great textile center. Men’s suits, he said, were about $100 for something you would find in the states for $800. He said all of his hotel clients shop at Arturo Calle, in the San Diego Shopping mall. So we are heading over to be suited up and then at 12 we meet Lilian Valez, a travel editor at El Colombiano, the local paper.

Then at 2 we will head out with a new guide into the country to see an authentic old village and drive up and down the mountain roads.

You’ll see it all here, and if you’re up listen to Tom Vannah’s show on WHMP at 7 am Friday for a full report about the trip.