What I Saw as We Glided by 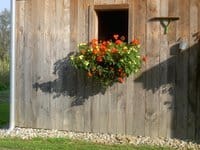 I sat by the train’s big picture windows and watched Austria pass by.  In one field, a little pony kicked up its hind legs at a bigger horse when he tried to bite him.  Next to the fields were huge bales of hay, all wrapped up in pale white or aqua blue plastic. Neat piles of logs were stacked up, and then a magnificent villa just sitting there in the open, and on top of a hill was  a church with a dark blue  onion dome, just above a red-tiled roof.

Next to one house, two grey donkeys with big ears, peering up to gaze at the train.  In the middle of hay fields, the little sheds of dark wood that are used to store hay.  So many of these dotting each field. The seamy backside of dozens of businesses; the palettes stacked with bricks, the lumber and the dumpsters. The split firewood that Austrians love to stack so tightly right next to their sheds, each piece less than one foot long, sometimes with designs in the middle of the stacks made by pushing some logs in more than the rest.

A lonely goat on a hillside, with no other animal companions in the  pen. Different breeds of cows, these almost grey, Ayrshire I think,  A rushing river flowing full with water from yesterday’s rains. Up in the hills, grass as green and trimmed as a fairway, as if it was mowed yesterday.  I was told that last year there were three cuttings for hay here.

Far off mountain peaks with snow covering most of them, distant glaciers. Flimsy fences that if not for their electric current, would not stop a sheep, let alone a cow or horse.  On the platform in Kitzbuhel, a group of teenagers, the girls all smoking cigarettes, a boy popping his gum in a girl’s ear, she chasing and kicking at him;  one other boy on the cell phone the whole time, watching, laughing but never hanging up.

A factory with  piles of logs and slabs of wood with ‘Bioenergie’ on the smokestack: An energy plant?A huge rock wall of a mountain obscured by clouds, they just moved out of the way to reveal the entire face.  In the Seltzthal station, a train next to us carrying entire tractor trailer rigs, complete with the cabs, saving them miles on the roads. One with markings from Moscow and Istanbul, just a few countries to the east.

Way, way up a hillside, cows grazing on a 45 degree angle,  solar panels shining in the sun. The train reverses direction, haven’t we been this way before?  I ask the man in the cafe car, no he says, showing me a map of our loop back down towards Graz.   An old  billy goat stooping to drink from an algae-covered farm  pond next to a dark wooden barn.

Swathes of clear cut trees, denuded hillsides. I asked our guide on our hike and he said that a few years ago a big storm knocked down thousands of trees here; loggers in Austria have to replant two seedlings for any tree they cut.  Suddenly bright sunlight fills the hillsides with late afternoon light, the cows form shadows that reflect downhill.

I confuse the lady coming to take the trash with the conductor and hand her my Eurail pass, she tosses it into the trash and we laugh as I retreive it, red-faced.  On a hill a man is walking wearing a traditional Austrian cap with a feather, boiled wool jacket knickers and high socks

The train is going very fast now, much faster than before, we are in the flat part of the country without the hills and dales that slow us down. I think that the engineer must like this part better, letting the electric motor really fly.