"Attention Must be Paid" to New Orleans in 2006 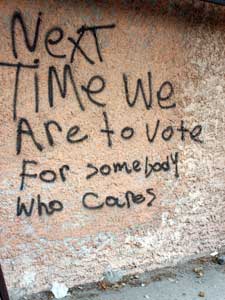 Janis Turk writes with eloquence and empathy about her beloved New Orleans in a new story on GoNOMAD.com. As she says, ‘attention must be paid,” and this piece really says it well.

“It was once said of James Dean that he had an “insufficient hopefulness” — a phrase that often comes to mind when people ask what it’s like in New Orleans now, more than a year after the levees broke flooding 80 percent of the city.

“The blood-dimmed tide is loosed, and everywhere the ceremony of innocence is drowned,” writes W.B. Yeats, and even as the rebuilding process begins in New Orleans, a brown water stain, like a nasty “ring around the collar,” seems to remain not only on the houses but on the hopes of the people.

As a travel writer with an apartment in the French Quarter for the past 12 years, wherever I go, people ask me about New Orleans. By now you’d think I’d have a ready answer, but somehow it always seems to catch me off guard, fumbling for a response. It’s as though my child has died and a well-meaning stranger at the grocery asks how I’m holding up.

But if you want to know about the underlying feelings of the locals there, besides those of sincere gratitude for all that remains, and you ask me how they’re doing, this is what I’d tell you today: An insufficient hopefulness still hangs like wreckage caught in high branches of trees.

Such tales should come as no surprise, for most of the good, well-meaning people of this nation just don’t “get” New Orleans any more than they “get” poverty, so you can’t fault them for not understanding what has happened here and what needs to happen next.

“How can you people dance in the streets during a funeral procession? How dare you celebrate Mardi Gras and Southern Decadence in the face of this horrific tragedy? Why should the Saints stay in New Orleans? Why should we rebuild a city below sea level?” Those who ask such questions don’t have a clue what it means to miss New Orleans, so it’s foolish to expect them to help bring it back.

That’s OK; Rhett Butler didn’t give Scarlett the money, but she found a way to keep Tara anyway. New Orleans didn’t “put on the drapes” for Mardi Gras just because we needed tourists, although we do, and I doubt even Scarlet put on the green dress just for Rhett. We did it for ourselves.”