Antigone Went a Little Too Deep 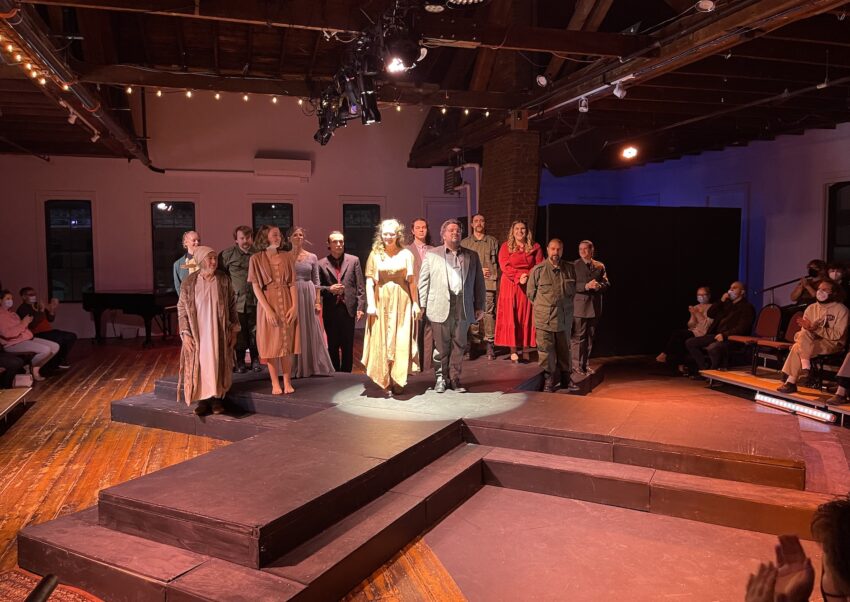 Antigone is a Hard Story to Tell in Modern Times

The story of Antigone goes back to 441 BC when it was written by the Greek playwright Sophocles.  There is very little that modern society can relate to in a play where the big issue is whether to bury a man who was killed by his own brother.  So this story starts out with a real learning curve, getting an audience in 2022 to relate to and understand these concepts presents a serious challenge.

Tonight at the delightful fourth-floor Perch at Hawks and Reed, we saw a re-designed stage to accommodate this Greenfield Community College production of a version of the play written in 1942 by French dramatist Jean Anouilh, who like Sophocleses’ characters in the original play, also have names that are hard to pronounce and remember. The story remained the same but the costumes were of the dramatist’s era, the 1940s.

The night was peculiar, as it was raining so hard in bursts that the actors had a severe challenge to be heard with the noise of the rain pounding on the fourth-floor roof!

The stage setup was a cross-shaped stage with steps that the actors could walk up and down on, and sit on. It worked well for a truly in-the-round performance. The new stage is directly in the center, surrounded on three sides by the audience, which numbers around 40 in this new configuration. Kudos to student stage manager Willow Glenn who helped with the creative set.

In director Tom Geha’s sparse production, they dispense with too many props…a simple toy shovel used to dig a grave and a cup of tea for the King will suffice.  We have the story in front of us, still vaguely familiar to those who remember reading it in high school–the story of Thebes and King Creon whose brother was Oedipus, the famous dad killer, and mom lover.

His two sons killed each other as foretold after Oedipus’ evil deeds, and we find the immediate rub—the King’s niece Antigone, (Sarah Close), whose father was also Oedipus, feels the need to give her dead brother a respectable burial.

But her Uncle, King Creon, had declared by unchangeable, royal edict that no one should dig such a grave lest they be killed like Oedipus’ son.

You know that no matter what, since this is ancient times, that won’t matter and the deed will be done and the bodies will pile up. It takes dozens of lines for Creon to articulate why he insisted on the decree but he painstakingly elaborates on the difficulty of wearing the crown and later, insists the key to life is the pursuit of happiness.

As with any classic play, there has to be a chorus, and in this case, it’s a well-dressed couple, (Alma Kibbe and Jimmy Murphy), who talk to the actors and to the audience.  When the play was about to begin an usher told us that there would be no intermission–and that the running time would be one hour 45 minutes, so we better use the bathroom now.

That actually turned into more than two solid hours and by the time the actors were finally finished, I was eager to see the house lights come up.

There were just too many complicated scenarios and too much dialogue to follow and honestly, it needed to have an intermission and fewer lines for everyone.  I do applaud King Creon (William LaPlante) and Antigone  (Sarah Close) for memorizing such long passages in the play.

The three guards played by Kyle Dargis, Andrew LaPenta and Connor Bailey provided some needed comic relief. Haemon, (Aidan O’Brian), the cursed son of King Creon played a strong part of the man whose lover Antigone was being sent to be locked up inside a cave to die.

This was an interesting and challenging evening of theater, with a story that is timeless, if hard to grasp fully.