The Wild Party: Too Big for the Center for the Arts Stage

It Really Was a Wild Party, Indeed

At Northampton’s new Center for the Arts on Hawley Street over the weekend, I took in the raucous musical, The Wild Party, set in 1929, and written by Andrew Lippa.

When I waited for the production to start, the small blackbox theater and small audience belied what would be happening over the next 140 minutes: A cavalcade of well-choreographed dance numbers with singers belting out Broadway-style songs doing complex dance routines with the audience just ten feet away.

Kudos up front to the dance captain Jessica Winter who also was cast member Jackie for her great work on the dance routines.

The dancing was complex, gymnastic and perfectly timed, and at times it seemed like the Center for the Arts stage just wasn’t big enough to contain these wild routines that had dancers flinging themselves around and at times getting a little too intimate with each other, as when Delores grabbed a male’s package during one of the routines…and I mean really grabbed it.  Hey the title doesn’t lie, and promised a wild party, remember?

Scenes included a bed where the characters huddled beneath sheets waved up and down by the cast and a full blown bathroom, complete with clawfoot tub and toilet. Set builders Bruce Torrey and Ed Zitka conveyed a multitude of different layouts using cleverly designed rolling set pieces.

The stars, Queenie (Chelsea Derby) and Burrs (Eddie Zitka) were described as having a truly magical sexual connection, so the actors had to prove the point and they did with simulated sex scenes and bawdy dance routines. Her idea was to throw a party, a raging, wild party and bring the motley crew of mutually debauched pals over to celebrate.  Queenie hatches a plan to find a replacement for Burrs, who we see belittling her and has proven to be a wife beater.

So as the party gets wilder and wilder, the couple both finds other people to kiss and flirt with, yet they can’t stop looking to see what the other one is doing. Drugs are sniffed, and feels are copped, repeatedly. 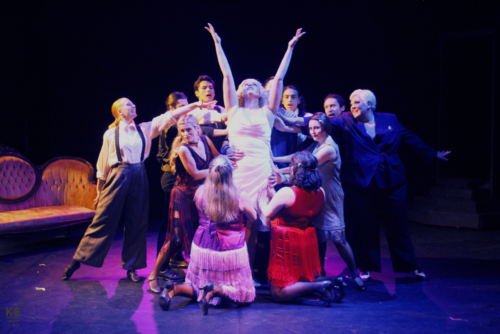 The audience howled with delight as Madelaine True (Christine Greene) belted out a tune “An Old Fashioned Love Story” that she modified for Northampton, inserting the word “lesbian” and using a vulgar gesture with two fingers that she sniffed.  That got a big cheer from the ladies behind me in the audience.

The plot is basically one of girl loses abusive boyfriend, finds a great guy, then the bad guy tries to woo her back and ends up getting shot by the new guy.  The twists and turns were all told in the song titles, but it was very hard to follow because of audio issues in the small theater.  The entertaining dancing and the many solos and twists and turns were fun so I didn’t worry about keeping track, it was a nonstop musical segue, with only a few lines of dialogue between songs. 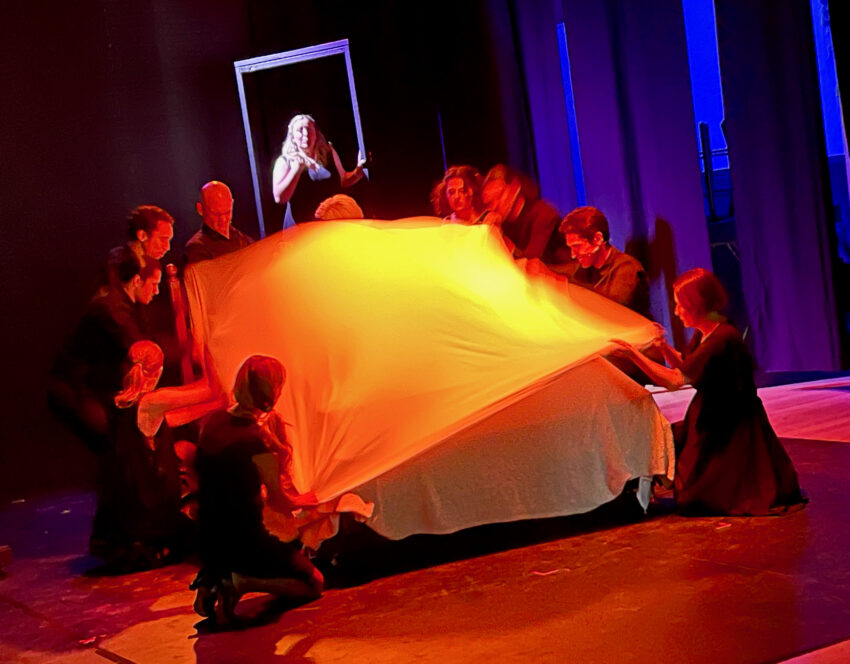 I had much difficulty understanding most of the words for all but one singer, the star, Queenie, (Chelsea Derby) and the songs were frequent, with 30 in all, and the story was told by the songs.

I think this show with its own orchestra (music directed by Bill Martin), deserved to be performed in much larger theater where the songs and mics would work better so that it was easier to understand the complex lyrics. I caught bits and pieces but relied on the program to tell me mostly what they were singing.

I’ve watched several complex musicals where the words were important at shows put on by Ja’Duke Theater and never had the problem of distortion and not being able to discern what the words were.

This is a fun show, and an ambitious effort to tackle a script with so many twists and turns and so many songs. Everyone in the cast put in their all, and it showed.  Enjoy The Wild Party yourself next weekend!

The play’s creator of the book, music and lyrics, Andrew Lippa, has long been a big broadway star writing hit songs for Disney movies and for many other big time productions.  The Wild Party made its debut in 2000 at the Manhattan Theater Club in New York. Each of the actors in this show have extensive resumes and many production credits, it was a seasoned cast all around.

The Wild Party, Northampton Center for the Arts October 15, 16. Directed by Bill Martin, choreography by Eddie Zitka, not appropriate for kids.

Czech Republic: Central Bohemia’s Highlights Little Shop of Horrors at Ja’Duke: It’s All About that Plant