Little Shop of Horrors at Ja’Duke: It’s All About that Plant

Tonight at the Ja’Duke Theater in Turners Falls, a six-foot wide plant took center stage. In their production of Little Shop of Horrors, four people manned the giant man-eating plant, and opened its flapping big pink mouth wide enough to show its teeth and swallow up three cast members, although one went in piece by piece.

But first, the scene is set by the three sirens, female street urchins from Skid Row, who provide a warning that this will be a horror shop, not a love story.

These three, named after the girl bands of the 1960s, are Crystal, Ronnette and Chiffon, (Rachael Howe, Alyssa Comeau and Ruthie Cogswell) and they set the jaunty scene with their pleasant harmonizing to doo-wap music.

They are everywhere, looking down, parading across the stage, explaining in song what is happening in the plot.

One thing that’s really nice about this purpose-built Ja’Duke theater is that every song is understandable.  Nick Waynelovich’s sound design makes it easy to follow the story with clear vocals throughout.

Audrey, the female star, played by Samantha Myburgh, once again shows her strong vocal ability and belts out her numbers with a clear and steady timbre, hitting the notes and looking great in her outfits.  In a dated nod to the way things used to be, we notice she has a black eye, that’s from Orin, (William LaPlante), the sadistic dentist would will get his comeuppance soon enough.

It’s funny in 2022 to casually accept men who beat their wives, but there it is, plain as day, in the script, giving the audience its first reasons to hate him. Then we find out about day job–he’s a dentist–and that seals his fate. That plant needs to eat, and we know what he really likes. Humans. Dentists. 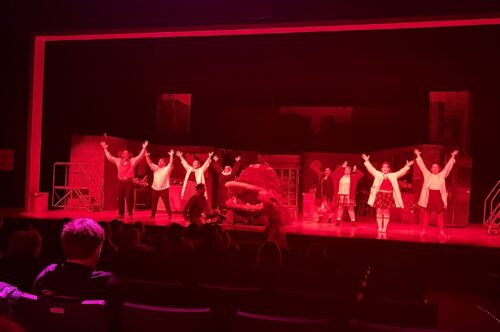 We meet a Woody Allen style nebbish named Seymour. In the movie, this role was played, or typecast, by Rick Moranis.

Tonight Justin Begin, a Ja’Duke Vet, played the role, complete with tape holding his nerd glasses together, and the bumbling, stumbling cadence of a guy whose going nowhere.

Justin is also a strong singer and belts out some solid numbers like “Suddenly Seymour” with gusto.

Soon enough, though, his adopted employer who took him off the streets of Skid Row and gave him a job using a broom, is asking him to become his son.

So in song, they agree to partner up, and become relatives. “Be My Son” was one of the fun numbers as they navigated the convoluted plot. Downtown was another highlight song, with the whole cast joining in and belting it out.

This production brought out many Ja’Duke veterans, such as Sam Myburgh, who has performed different roles for other productions of this show, Little Shop of Horrors on two previous outings. BJ Kulp, (Mr Mushnik) is a Ja’Duke vet with a dozen musicals here under his belt. And Sara Paige (Audrey II) is performing in her 8th Ja’Duke show!

The play by Harold Ashman was originally performed off Broadway in 1982, and later became a big budget film in 1986 with Moranis, and featuring Bill Murray and Steve Martin in small roles.

There was actually one ending that saw both Audrey and Seymour fed to the plant and then the beast went on to take over New York City. Audiences reacted so poorly to seeing the two popular characters get killed off that the ending was changed.

In the version we saw tonight, we saw a more tame ending that didn’t shock even the youngsters in the audience.

Credit must be given to the five hard working actors who toiled inside the gigantic plant, who made it talk, sing and swing around in time to the lively music of the show. Jenn Argy, Len Bittenson, Dyland Vinton deserve kudos for their anonymous efforts inside the green beast.

Tonight I brought my cousin Stephen with me to enjoy the show. As we both agreed when we were leaving the theater, there is just nothing as much fun as seeing live theater. The energy of the singers, the way they memorize so many lines and stay in character, it all makes for a delightful night of entertainment, old school style.

The Wild Party: Too Big for the Center for the Arts Stage A Fine Day to Turn 64: Birthday Cruise on the Scenic Eclipse