Taste of Northampton Returns after 18 Years! 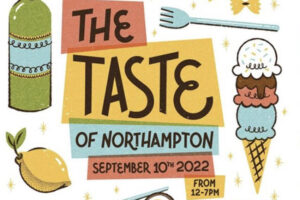 Taste of Northampton Moves to Main Street and Cars Get the Boot! Saturday September 10, 20202

This is so great, I can’t wait to get back to this super fun event that during the late ’90s and 00’s was part of every summer. The Taste of Northampton is back!

I can’t even link to a blog post about the great yearly food event, because I started my blog in 2004, which was the last year they held the shindig.  In its original incarnation, the event was a three-day affair.  And they used the parking lots behind Thorne’s Market and the whole space always felt too crowded.

There were just too many people who wanted to come down and nosh on Taste favorites like the gorgonzola garlic bread at the Eastside Grill, or the peanut noodles and satay at Panda Garden’s booth.

I did post about the Taste of Amherst, back in 2010, and I recall that I was sad, missing people around me who had left. I had this to say back then, 12 years in the rear-view.

We always wanted to compete with the Taste of Northampton, but nobody wanted to use those damn tokens.  Funny how the bigger Northampton event has been retired, yet the frisky little brother from Amherst just gets better every year.  What I remember about Noho’s event was that it was always too crowded and it began to be a drag. Having on the bigger common is a much better venue.

Yes indeed, my thoughts were the same as the organizers, so now they have done something I am a big fan of: closing down Main Street between Old South and King Streets and just letting every restaurant set up on the street.  They’ve been doing this with great success for Northampton’s Holiday Stroll.

If anyone has been to Burlington Vermont, they’ve probably strolled on the Church Street Mall, or Boulders’s Pearl Street area.  Some day, Northampton could re-route those Rt 9 cars out of the Main Street area and make it one big pedestrian area. This is being done all over Europe and it really is worth examining as a permanent move.