I’ve just spent some time in a city I had never heard of, Almeria, but one that turned out to be the most attractive city and surrounding area I’ve traveled to in a long time.  Our introduction to the city began in the desert, a true scalding landscape of rough shrubs and undulating brown mountains. This arid place has stood in for a variety of other landscapes around the world, from the setting for some scenes in the Indiana Jones series to famous Game of Thrones episodes. 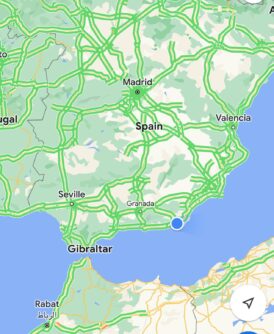 It got its fame from Italian director Sergio Leone, who brought American film actor Clint Eastwood here (before he was a star) to act in the legendary Spaghetti Westerns like Fistful of Dollars, and The Good the Bad and the Ugly.

They built a classic western frontier town here, and you can see the same storefronts and saloons in the movies as we saw when we toured the popular tourist attraction called Oasys, Mini Hollywood, which also has an animal and nature park at the back behind the full-scale western village.

As we approached the park, the heat was approaching 36, and a shimmer came up from the arid landscape, but still, a cowboy ran a big horse around a circular track, and kept up the pace despite the temp.  The western village is full of cowboys, the only telltale sign of 2022 is the mask that a few of the riders wore.

They have a big cafeteria here where you can dine on an all-you-can-eat buffet, (something I don’t think is very common in Spain), and it’s the perfect place for dozens of photos in front of the mock court house, liquor store, and grain dealer’s shops.  The whole thing was fun and worth a visit, especially when we played back a few scenes from Fistful of Dollars to see the same storefronts we just visited. 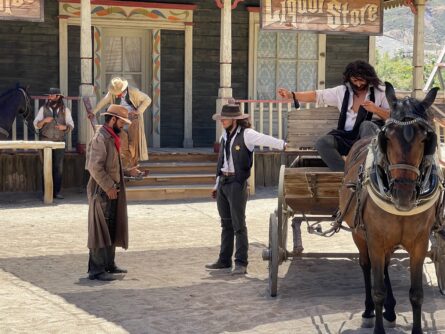 But Almeria awaited, and boy were we in for a treat.  Our visit started in the desert, where we met a man who rents out a fleet of Polaris 4×4 dirt buggies, called Desert Buggy.

After donning goggles and neckerchiefs we headed out, following each buggy in single file as we navigated steep slopes and rocks in the road, that the high riding 4x4s easily passed.

The top speed was 30 km, and seeing the scenery up close brought out the occasional green of an oasis as well as a tour of buildings constructed nine years ago but mean to look ancient.

It was fun seeing them up close, with the fake stucco turning out to be styrofoam, and metal framing buttressing the walls in the back out of camera range.  The ancient-looking houses were used in scenes from Exodus, by Ridley Scott and later by HBO’s Game of Thrones.  The whole city is full of film references, in one shop a tee-shirt had “the Good the bad and the ugly” in Spanish.

The city is doing many things to improve itself, as it is known as the Cinderella of Andalucia, far to the east and most frustrating, not connected to Spain’s legendary AVE high-speed train network. It’s hard to get here but really worth it.

A project to convert a former elevated train track designed by Frederick Eiffel is underway, as is a series of beautiful stone steps that will overlook a new park just below the city’s most famous building the Alcazaba fortress, is also in progress.

Many of the city’s main boulevards are lined with stately ficus trees that provide copious shade and lose their leaves sporadically, unlike deciduous trees, providing nearly year-round shade. And you need that shade here, as it gets very hot.

Our last night was a treat, a Michelin-starred chef Juanjo Carabajal presented an impressive array of very creative dishes, including one slow-cooked artichoke round that melted in your mouth.

His restaurant, Cuatro Hojas, is right on the main square in the old town, and it is truly memorable.

The incredible Parque Natural de Cabo de Gato has jaw-dropping views, and absolutely nothing to mar the landscape. It’s all because of Dona Partyla, who owned the land and turned it into one of Spain’s most beautiful natural parks.