Red: Passion and Patience in the Desert, a Writer’s Fearful Voice Comes to Life

Red is the Writing of Terry Tempest Williams Come to Life

One of the entries into the UMass Theater’s Fringe Fest ’22 is called “Red: Passion and Patience in the Desert,” conceived and written by Bianca Dillard.

The play is based on the book by the writer and novelist Terry Tempest Williams, who made her name by writing strident and provocative essays about the environment and taking many important stands in her native Utah.  One thing she did was buy up 1120 acres of land to deny drillers the rights to the oil and gas underneath. Ballsy move.  It caused the University of Utah to cut ties with her in 2016 after long, painful negotiations.

Bianca is clearly a big self-confessed fangirl of Williams’ and this play was a way to pay homage to the writer’s work by having actors put her essay into motion.  Two other actors, one male (Preston Knecht) and the two female,  (Linyi Lin and Micki Kleinman) help along the way in a sparse set with just podiums and chairs.

The tiny Curtain Theater at the UMass Fine Arts Center is a fun space, you look down on the action from the small number of seats, maybe 40 or 50.  It’s as BlackBox as you can get.

Having just written a review of a complex and moving play by Silverthorne Theater on Friday night, “Admissions,” where the actors memorized a very long series of monologues and lines, seeing the actors holding their scripts on stage was a disappointment, but I guess this was a kind of a modified reading and play, though it was not billed as a reading.

The timing was a big issue here, it took about ten minutes to actually begin the play, with Bianca going through a series of things like writing TTW’s name on a piece of paper and putting it in her pocket, and then the action stopped when Bianca became overwhelmed with it all and had to sit down on the stage. It was hard to tell when they were using their scripts and when it was extemporaneous. 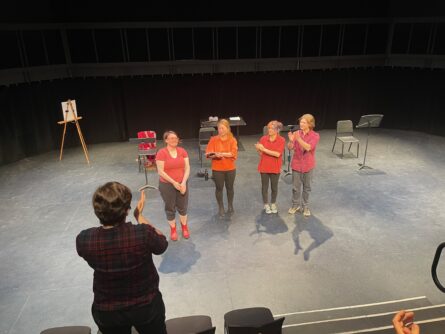 Bianca as TTW did have good points to make here, the parallel between the floods in Salt Lake City in 1983 that people knew were coming but didn’t adequately plan for are reasonably analogous to the way our government leaders are barely reacting to impending climate change.  It’s a call to action, a plaintive wail into the darkness, it’s a frustrated generation beseeching the world to pay attention.

There are some scenes in the play that are quite entertaining, like when the chairs are arranged as if they are the first-class cabin of an airplane on a long-haul flight and Bianca/Terry sits next to an executive from Procter and Gamble.

The executive is blithely clueless about his role in how the world is changing and oblivious to the facts to the impact of his corporation’s attempts to squash environmental laws in poor countries.  She presents a fascinating corollary about how P&G managed to rid Spain of their beloved afternoon siestas, chipping away hour by hour until like the U.S., their employees no longer got to take the afternoon off as they had for hundreds of years. She also skewers the company for how they eliminate the problem of environmental laws by bullying smaller countries who need their jobs.

Bianca weaves in more of TTWs life, her father’s job as a construction company owner and the battles he faced over the endangered species act that cost his company hundreds of thousands of dollars. We see the symbol of the fight in a toy tortoise that’s slowly pulled across the stage.  This play really does pack quite a bit into the 90-minute running time, even mentioning the town of St George Utah as the location of the injustice.

It shows how confusing and agonizing taking a stand is when your family’s business is threatened and you won’t adopt the family religion of Mormonism.  The LDS takes a hit many times in the play, clearly, it’s a sore spot for TTW and their dogmatic reactions like forcing kids to sing LDS songs about ‘Brother Brigham.” It’s awkward and shows part of why TTW rejected the religion.

Red: Passion and Patience in the Desert at the Curtain Theater Bromery Center for the Arts UMass. Showing April 28 at 7:30 pm. Adapted by Bianca Dillard, part of the Fringe Fest ’22.

“Admissions:” When Everyone is Right About Diversity Yet Wrong The Drake: Finally a Home for Live Music in Downtown Amherst